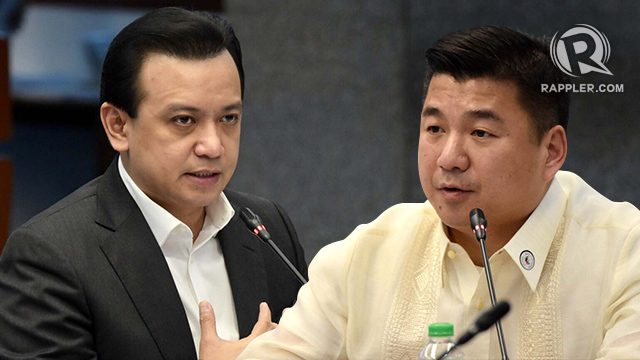 Facebook Twitter Copy URL
Copied
'As it is, it's now oozing with preferential treatment and, at worst, cronyism,' says Senator Antonio Trillanes IV

During the Senate hearing on the matter on Thursday, January 24, Trillanes questioned Uy’s qualifications to run a telco.

“As it is, it’s now oozing with preferential treatment and, at worst, cronyism,” said the senator, one of Duterte’s fiercest critics.

Uy has a diverse portfolio, with interests in oil, real estate, and hospitality. The businessman admitted that he has no experience in the telco space, but said that he can learn how to run the business.

“As a businessman, we are capable in due time to be able to learn and compete. Hindi naman ibig sabihin wala tayong experience hindi tayo puwedeng makalaban sa isang sektor (Just because I don’t have experience doesn’t mean that I cannot compete in a sector),” Uy said.

Trillanes went on to highlight that Uy donated P30 million for Duterte’s presidential campaign. Uy’s wife, Cherylyn, as well as other officials of Udenna Corporation, donated to Duterte’s campaign.

Uy confirmed he is close to Duterte as well as the President’s former aide Bong Go.

But Senator Grace Poe reminded the panel that it is not “a sin” to be friends with anyone.

Poe added, “Hindi kasalanan na mamuhunan sa isang bagay lalo na kung makakatulong ito sa taumbayan (It is not a sin to invest in something, especially if it would help the public).”

According to Uy, Mislatel went through a difficult process in getting the slot. (IN CHARTS: Udenna Corp-China Telecom’s promises)

“Mislatel went through the process of preparing for the bid for almost a year,” he said.

Uy assured the committee and the public that they did not bend the rules. He added that they will protect the interest of the country. – Rappler.com