Mar 5, 2019 12:22 PM PHT
Agence France-Presse
Facebook Twitter Copy URL
Copied
President Donald Trump has made an overhaul of global trade and the slashing of American trade deficits a central plank of his presidency 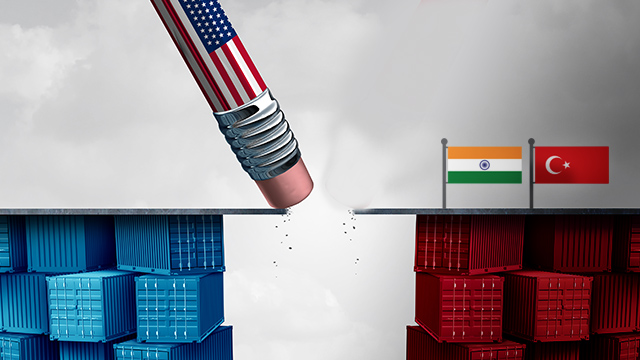 WASHINGTON, DC, USA – Washington will scrap the preferential trade status of India and Turkey, the US trade chief’s office said, as President Donald Trump ramps up his battle against what his administration views as unfair foreign trade practices.

Trump has made an overhaul of global trade and the slashing of American trade deficits a central plank of his presidency.

The Generalized System of Preferences (GSP) program for developing nations had granted favorable treatment to both countries for a range of manufactured goods imports, such as automotive parts, tires and appliance parts.

But the Trump administration will end “India’s and Turkey’s designations as beneficiary developing countries” saying they no longer qualified for the reduced tariffs, US Trade Representative Robert Lighthizer said in a statement late Monday, March 4.

India, the biggest beneficiary of the GSP program, had failed to assure Washington that it would allow required market access to American firms, and instead erected “trade barriers that create serious negative effects on United States commerce,” the statement said.

New Delhi played down the effect of the decision, with Commerce Secretary Anup Wadhawan saying the withdrawal of the program would not have a “significant impact” on Indian trade.

Of India’s $80 billion in annual exports to the US, only $5.6 billion were covered by the preferences, he said, according to a report by the Press Trust of India news agency.

New Delhi’s commerce ministry said India’s tariffs were in line with its commitments to the World Trade Organization, while imports of US oil and natural gas had narrowed the US trade deficit with India in recent years.

“This decision contradicts our mutual objective of reaching bilateral trade volume of $75 billion… The decision will also negatively affect US small and medium-sized enterprises and manufacturers,” Ruhsar Pekcan said on Twitter on Tuesday, March 5.

“We still would like to pursue our target of increasing our bilateral trade with the US who we see as our strategic partner, without losing any momentum,” she said.

The changes cannot take effect for at least 60 days following the notification to Congress and the countries affected – a process Trump began Monday with letters to the speaker of the House of Representatives and the president of the Senate.

The change for India came after “intensive engagement” between New Delhi and Washington, Trump wrote in one letter, released by the White House.

“I will continue to assess whether the government of India is providing equitable and reasonable access to its markets, in accordance with the GSP eligibility criteria,” the president wrote.

And USTR said Turkey has demonstrated a “higher level of economic development,” meaning that it can be “graduated” from the program.

In his letter on Turkey, Trump said the country’s economy “has grown and diversified,” and noted that Istanbul has already “graduated from other developed countries’ GSP programs.”

The decision came as Washington and Beijing seek to negotiate an exit to the Trump administration’s most high-profile and costly trade battle.

The US and China agreed to a 90-day truce to work out their differences, and Beijing and Washington have been edging closer to an agreement in recent weeks.

The truce was scheduled to end on March 1, but Trump lifted an ultimatum on further tariff hikes after expressing satisfaction with the progress made in several rounds of talks.

Under an agreement taking shape, Beijing would lower some barriers on US companies’ operations in China and purchase large amounts American agricultural and energy goods if the United States lowered most of the tariffs in return.