PH to get $10B in deals, investments from Duterte’s China visit – DTI 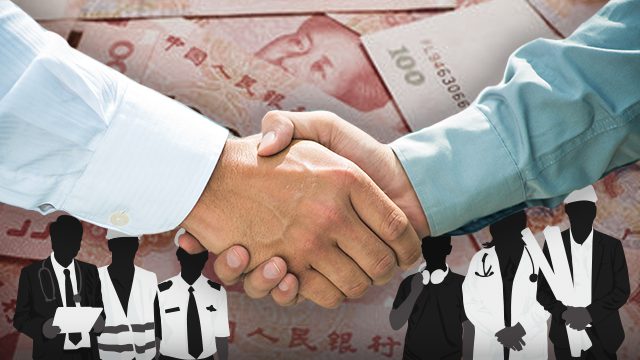 Facebook Twitter Copy URL
Copied
Trade Secretary Ramon Lopez says more than 20,000 jobs are expected to be created by deals to be signed on the sidelines of President Rodrigo Duterte's participation at the second Belt and Road Forum in Beijing

MANILA, Philippines – The Philippines expects to get $10 billion in investments and  deals with China when President Rodrigo Duterte goes to that country for the second Belt and Road Forum on April 25, the Department of Trade and Industry said.

In a statement on Tuesday, April 23, Trade Secretary Ramon Lopez said the $10-billion amount may increase “as more agreements may be added” during the President’s China trip.

Lopez said about 15 agreements are expected to be sealed during the President’s trip, which will be in the areas of energy, food, infrastructure, power, services and technology.

Over 20,000 jobs may be generated by these agreements, he added.

During the  Belt and Road Forum on International Cooperation in 2017, Chinese President Xi Jinping called the Belt and Road Initiative (BRI) the “project of the century,” and one that opens doors for all countries by promoting globalization and connectivity.

Duterte attended the first forum in 2017, affirming his intent to improve ties with China.

Speaker Gloria Macapagal Arroyo echoed Duterte’s sentiment on Tuesday in her speech at the Boao Forum for Asia, saying economic ties between the Philippines and China under the current administration were better than ever. – Rappler.com