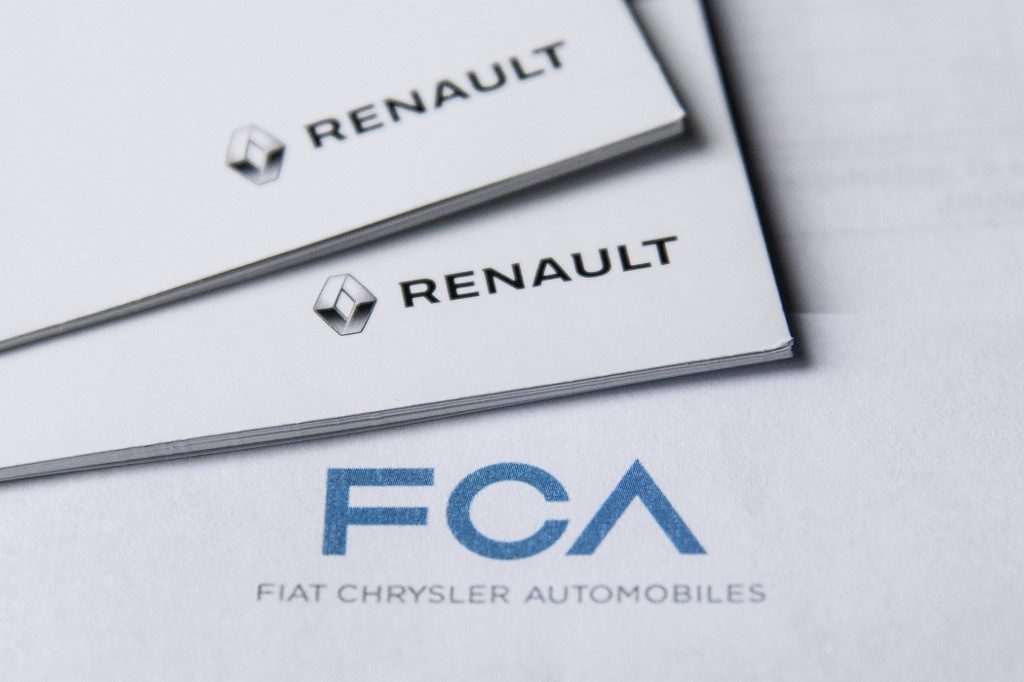 Facebook Twitter Copy URL
Copied
(UPDATED) 'It has become clear that the political conditions in France do not currently exist for such a combination to proceed successfully,' says Fiat Chrysler, as it withdraws its Renault proposal

Fiat Chrysler (FCA) had stunned the markets last week by proposing a “merger of equals” with the French group that would create an auto giant spanning the globe.

The plan was welcomed by analysts as one of the few deals in the auto sector that might prove a success, given the companies’ complementary range of vehicles and regional markets.

The French government, which controls 15% of Renault, gave it a conditional green light but also warned against “haste.”

In a statement issued after a board meeting Wednesday evening, June 5, FCA said it “remains firmly convinced of the compelling, transformational rationale” of its proposal, which it said was “carefully balanced to deliver substantial benefits to all parties.”

“However it has become clear that the political conditions in France do not currently exist for such a combination to proceed successfully,” it added.

Renault, whose longstanding alliance with Japan’s Nissan is in trouble, expressed its “disappointment.”

Shares in the French company plunged by almost 7% in early afternoon trades in Paris. In Milan, FCA shares also slid at the open but then recovered to show a small gain.

The deal would have created a group worth more than 30 billion euros ($34 billion) across the two companies’ namesake brands as well as Alfa Romeo, Jeep, Maserati, Dacia, and Lada.

Renault’s board had said on Tuesday, June 4, that it was studying “with interest” the FCA offer but held off on granting approval pending further deliberations.

On Wednesday, all Renault directors favored the merger, apart from an employee’s representative affiliated with the powerful CGT union and two from Nissan who abstained, a source close to Renault said.

The two Nissan directors were said to have asked for more time to approve the deal. There was no official comment from Nissan headquarters in Tokyo.

Relations in the partnership have been under strain since the arrest in November of former Renault and Nissan boss Carlos Ghosn, who awaits trial in Japan on charges of underreporting his salary for years while at Nissan and using company funds for personal expenses.

Le Maire had set conditions for the FCA tieup, including no plant closures and that the Renault-Nissan alliance be preserved.

A combined mega-group that included Nissan and Mitsubishi would be by far the world’s biggest, selling 15 million vehicles and surpassing Volkswagen and Toyota, which sell around 10.6 million each.

The Renault source said Le Maire had asked for another board meeting next Tuesday, June 11, after he returns from a trip to Japan where he was to discuss the proposal with his Japanese counterpart.

A source close to FCA blamed the “sudden and incomprehensible” objections of Le Maire’s ministry for causing the collapse of the deal.

“New demands imposed by the French government have led to this damaging situation for all parties,” the source told Agence France-Presse.

But Le Maire stressed that of his conditions for the FCA alliance, only the explicit approval of Nissan remained to be secured, while aides denied that the ministry had played politics with the deal.

A source close to the finance ministry said the French government “regrets the hasty decision of FCA.”

“From the beginning, the [French] state has wanted the necessary time to examine” the deal, the source said.

“Despite significant progress, a short delay was still necessary so that all conditions set by the state could be met.”

Foreign takeovers of major French firms are highly controversial and successive governments have sought to defend domestic industrial groups that are seen as important for their technology or jobs.

“And to seek [more] time for a wedding is normal,” he told Franceinfo radio, while keeping the door open for the deal to be revived. – Rappler.com