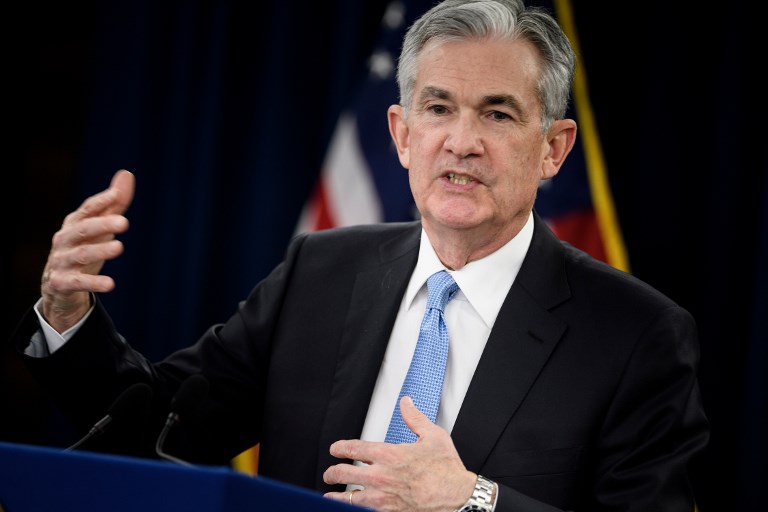 WASHINGTON, USA – The United States Federal Reserve opened the door to an interest rate cut on Wednesday, June 19, vowing to act to keep the economy growing as uncertainties about trade and other issues mount.

US Federal Reserve chief Jerome Powell said trade friction and slowing growth worldwide have led many central bankers to feel the case for an interest rate cut has “strengthened” but most still want to see more data before making a move.

But one policymaker dissented in the vote, advocating for an immediate cut – something US President Donald Trump has been calling for loudly and which many economists say is necessary given the damage done by the escalating trade frictions.

The policy-setting Federal Open Market Committee (FOMC) kept the key rate in the 2.25% to 2.5% range but sent a strong signal of possible cuts ahead, saying “uncertainties about this outlook have increased” and the Fed “will act as appropriate to sustain the expansion.”

After the meeting, Powell confirmed monetary policy could soon become more “accommodative,” a byword for lowering the rate that serves as the basis for all types of lending from autos to homes to credit cards.

“Uncertainties surrounding the outlook have clearly risen since our last meeting” and officials are “mindful of ongoing cross currents, including trade developments and concerns about global growth,” he told reporters.

“While the baseline outlook remains favorable,” he said, “many FOMC participants now see that the case for somewhat more accommodative policy has strengthened.”

But he cautioned that it is important they not overreact to single bits of data or a “short-term swing in sentiment.”

Markets are almost universally predicting multiple Fed moves this year and seem to view the Fed stance as dovish enough for now, with the 3 major stock indexes closing with modest gains following the announcement.

However, Trump may be disappointed not to get a rate cut, since he has accused the Fed of undercutting his efforts to supercharge the economy.

He even hinted Tuesday, June 18, he might remove Powell from his post, but the Fed chairman said Wednesday he believes the law is clear that he has a 4-year term.

“I fully intend to serve it,” he said.

Trump on Tuesday also bashed European Central Bank chief Mario Draghi, saying his signal of more stimulus ahead would put the United States at a disadvantage against a weaker euro, which would make American exports less competitive.

Powell declined to wade into that debate or comment on the exchange rate, saying only that the central bank does not use interest rate policy to influence the American currency.

He said “we don’t target the dollar…we will target our domestic economic and financial conditions and not our exchange rate.”

However, the dovish comments did impact the exchange rate, as the dollar weakened slightly against the euro and other currencies.

James Bullard, president of the Fed’s St Louis regional branch, voted against the decision, saying he wanted to see the federal funds rate cut by 25 basis points at this meeting.

Bullard earlier this month was to first central banker to give voice to the expectations of financial markets that economic conditions would require the Fed to act, saying a rate cut could be needed “soon.”

Diane Swonk, chief economist Grant Thornton, who before the meeting had called for an immediate move, said the Fed’s language “suggests a willingness to cut rates in July.”

But with Trump expected to meet China’s President Xi Jinping next week at the Group of 20 summit in Osaka, Japan, there is a chance for good news to deflate trade tensions and clear away some of the gloom.

“There are some within the Fed who wanted to wait out the G20 meetings to see if the president levies additional tariffs on China but their mood about the economy has clearly darkened,” Swonk said.

The quarterly forecasts issued by the central bankers on Wednesday revealed a decidedly more dovish tilt, with committee members split on whether to keep the key rate where it is now or lower it.

But the projections did not reflect much change in the outlook for the economy: the median estimates for growth and unemployment were essentially unchanged compared to March, while the forecast for inflation was cut to 1.5% from 1.8% previously. – Rappler.com