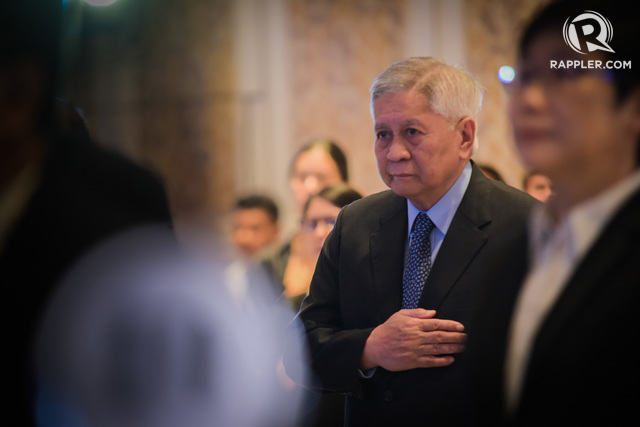 “This is a big deal. Del Rosario is a major shareholder in First Pacific, which is based in Hong Kong. His partners are Indonesian,” said Aaron Connelly of the International Institute for Strategic Studies in Singapore in a tweet on Friday.

“Again goes to the question of whether Hong Kong is still a safe place for capital,” he added.

This is a big deal. Del Rosario is a major shareholder in First Pacific, which is based in Hong Kong. His partners are Indonesian. Again goes to the question of whether Hong Kong is still a safe place for capital. https://t.co/NZ0K1WfWzS

Del Rosario was denied entry to Hong Kong after being held for about 6 hours. He said Hong Kong immigration authorities did not give him an explanation “in disregard of travel with a diplomatic passport that is in violation of Vienna Convention.”

Del Rosario was supposed to attend the board and shareholders meetings of Hong Kong-listed First Pacific Company Limited.

Del Rosario is a non-executive board member of First Pacific.

First Pacific is an investment management and holding company, with assets in consumer food products, infrastructure, natural resources, and telecommunications.

It is a major shareholder of Indonesia’s PT Indofood Sukses Makmur Tbk, owning 50.1%, as well as Indofood Agri Resources Ltd with 31.4% stakes of the company.

The former top diplomat arrived in Manila on Friday at around 4:30 pm.

After being denied entry to the city, Del Rosario said that he would have to think about his obligations to the holding firm.

“Even if I go, I don’t think the Hong Kong immigration will accept me because otherwise it’s a waste of trip,” he said.

“You can’t be treating foreign investors in this manner,” he said.

Hours before he was denied entry to Hong Kong, Del Rosario had called the joint Philippines-China investigation of the sinking of a Filipino boat in the West Philippine Sea an “insult” to the intelligence of the Filipino people.

He was held exactly a month after former ombudsman Conchita Carpio Morales was detained at the Hong Kong International Airport. They both had complained against Chinese President Xi Jinping and other Chinese officials for alleged crimes against humanity in the West Philippine Sea. (READ: Ex-PH officials bring China’s Xi to Int’l Criminal Court) – Rappler.com