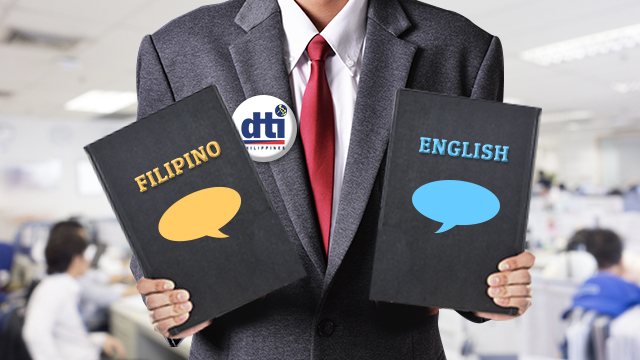 MANILA, Philippines – The Department of Trade and Industry (DTI) issued a department administrative order (DAO) mandating establishments to include English and/or Filipino translations in their business materials.

Trade Secretary Ramon Lopez said in a statement on Thursday, June 27, that DAO No. 19-09 seeks to protect consumers by making information more accessible to help them make better purchase decisions.

“Presenting information on products and services in foreign languages other than those officially recognized and used by the consumers are deemed unfair and discriminatory, thus, inimical to their interest,” Lopez added.

Businesses will be given a month to comply after the effectivity of the order, which will happen 15 days after its publication in two major newspapers of general circulation.

The new mandate is a result of the DTI’s surprise inspection at an alleged “Chinese-only” food park in Las Piñas City in May, where it was found that there were no English translations provided on the signages, menus, and receipts from the stalls there.

The DTI considered the lack of translations as a “form of deceptive, unfair, or unconscionable sales act.”

With the DAO, businesses now have to provide English and/or Filipino translations on the following:

The translations should be visible and easy to read. The DAO also states that the translations may include languages and dialects spoken in the provinces of the Philippines.

Establishments also have to secure certification either from the embassy of the country where the foreign language is spoken or from an accredited translator recognized by the DTI to ensure the accuracy of the translation.

Failure to comply will result in a fine ranging from P1,000 to P300,000, depending on the gravity and frequency of the offense.

The DTI may also cancel the establishment’s business name certificate and recommend the cancellation of its business registration, permit, license, and other clearances to the respective local government unit. – Rappler.com