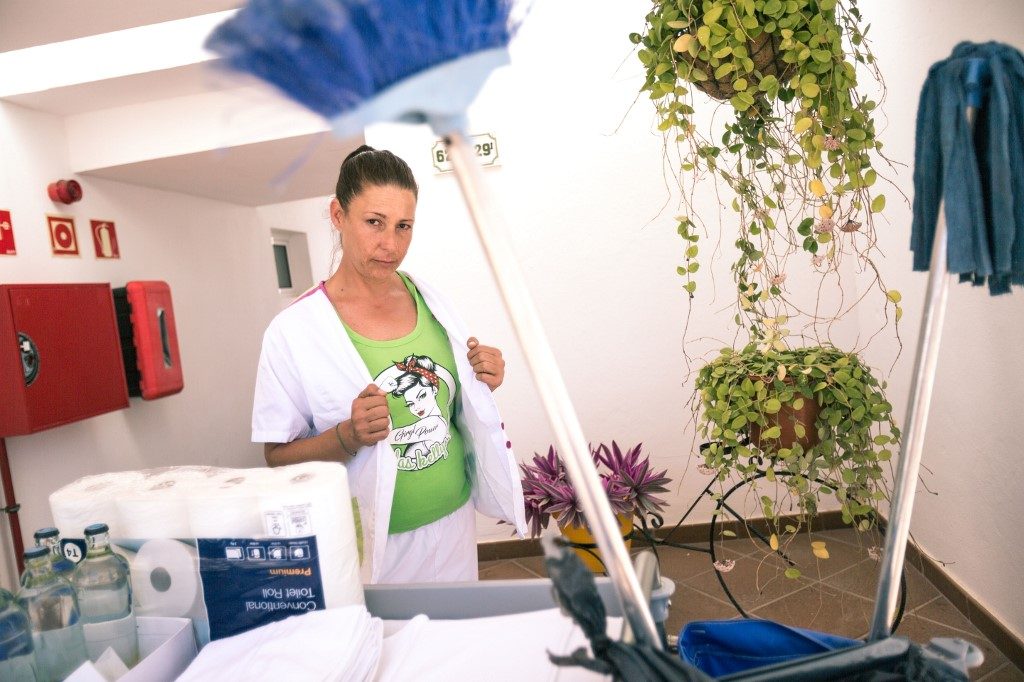 MADRID, Spain – After protesting for years in front of hotels, a group of Spanish chambermaids has scored victories in their struggle to end subcontracting of their services, which leaves them poor and exhausted.

“We point accusing fingers at hotels by going right to their doors and shouting ‘exploitation here,’ so they’re a little scared of us,” says Myriam Barros, one of the spokeswomen of the group called “the Kellys.”

Discreet at work where clients hardly see them slipping into rooms, they turn into “warriors” when they put on their activist green t-shirts, the 40-year-old says.

“The Kellys” movement – a contraction of las que limpian in Spanish, or “those who clean” – was born in 2014 on Facebook. An association followed in 2016.

Since then, “they have managed to make visible to society the very hard work of more than 150,000 chambermaids,” says Gonzalo Fuentes of the CCOO union.

On Twitter, the movement’s Madrid section has warned holiday-goers: “Don’t stay in a hotel where the cleaning is subcontracted.”

“If you don’t do it for us, do it for yourself as the quality of [hotel] stars is no longer a guarantee and hygiene is only superficial.”

Since Spain’s labor market reform in 2012, many hotels have sacked their employees and subcontract cleaning services to “multiservice” companies.

Barros says working conditions there are considerably worse than in hotels, with salaries down some 40%.

But she’s fighting for other chambermaids around Spain who are subcontracted and “clean more than 400 rooms a month on average for 800 euros net.”

They risk being fired if they protest or fall ill.

But the protests are bearing fruit.

In the southeastern resort of Benidorm, “8 hotels we denounced this winter had to give us two days of rest a week instead of one because the health and safety executive forced them,” says Yolanda Garcia, 55, the local spokeswoman for the Kellys.

Contacted by Agence France-Presse, the Spanish Confederation of Hotels and Tourist Accommodation refused to comment.

As representative of the Kellys, Barros in March received the “TO DO Award Human Rights in Tourism 2019” at Berlin’s international tourism fair in March.

Back in 2017, they went to the European Parliament to denounce ever-increasing subcontracting.

One is a “5-star hotel where chambermaids don’t even get 3 euros per cleaned room, there is another, which has a very nice pool, where it’s not even 2.5 euros.”

Last year, then conservative prime minister Mariano Rajoy had a meeting with a Kellys delegation, just before he was toppled in a no-confidence vote.

“We were included in a list recognizing job-related illnesses that affect our arms, to shut us up slightly,” says Barros.

The movement is waiting to see what Socialist Prime Minister Pedro Sanchez’s government will do.

The tourism minister and junior minister “have already met several times with the Kellys,” a government spokeswoman said, adding it has taken steps towards regulating subcontracting.

In 2016, the Socialists, in opposition at the time, had presented a bill to “guarantee that subcontracted workers…get the same conditions than if they were employed directly,” in vain.

The association, meanwhile, would like a “Kellys law” that simply bans subcontracting of cleaning services. – Rappler.com