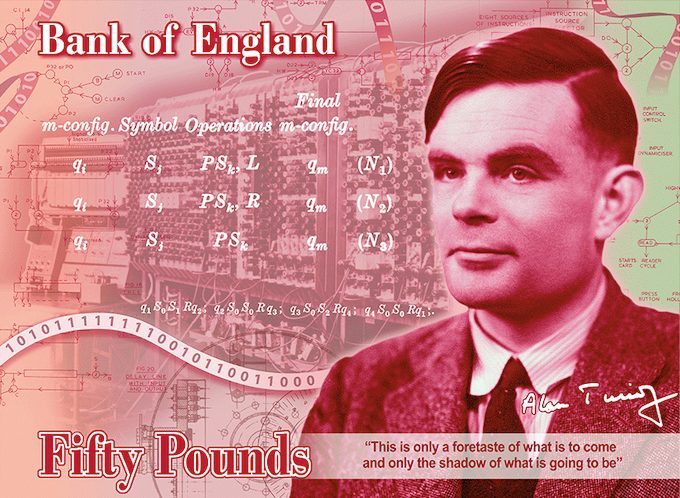 Facebook Twitter Copy URL
Copied
The Bank of England, in unveiling the new £50 banknote, hails mathematician Alan Turing as 'a giant on whose shoulders so many now stand'

LONDON, United Kingdom – The Bank of England on Monday, July 15, said World War II code-breaker Alan Turing had been chosen to feature on the back of Britain’s new £50 banknote ($63 or 56 euros).

“Alan Turing was an outstanding mathematician whose work has had an enormous impact on how we live today,” Bank of England (BoE) Governor Mark Carney said as he unveiled the note at the Science and Industry Museum in Manchester, northwest England.

“As the father of computer science and artificial intelligence, as well as war hero, Alan Turing’s contributions were far ranging and path breaking. Turing is a giant on whose shoulders so many now stand,” the BoE chief added.

The Bank of England said that Turing played a pivotal role in the development of early computers.

Turing received a posthumous pardon from Queen Elizabeth II in 2013 over a conviction in 1952 for gross indecency with a 19-year-old man.

He did not go to prison but was chemically castrated and died of cyanide poisoning in an apparent suicide in 1954, aged 41.

In 2017, the “Alan Turing Law” posthumously pardoned men who had been cautioned or convicted under historical legislation that outlawed homosexual acts in Britain.

The Bank of England is putting new faces on Britain’s banknotes as it switches from paper to polymer, a thin, flexible plastic film that is seen as more durable and secure.

The new £20 note, due to enter circulation next year, will feature artist JMW Turner on its back.