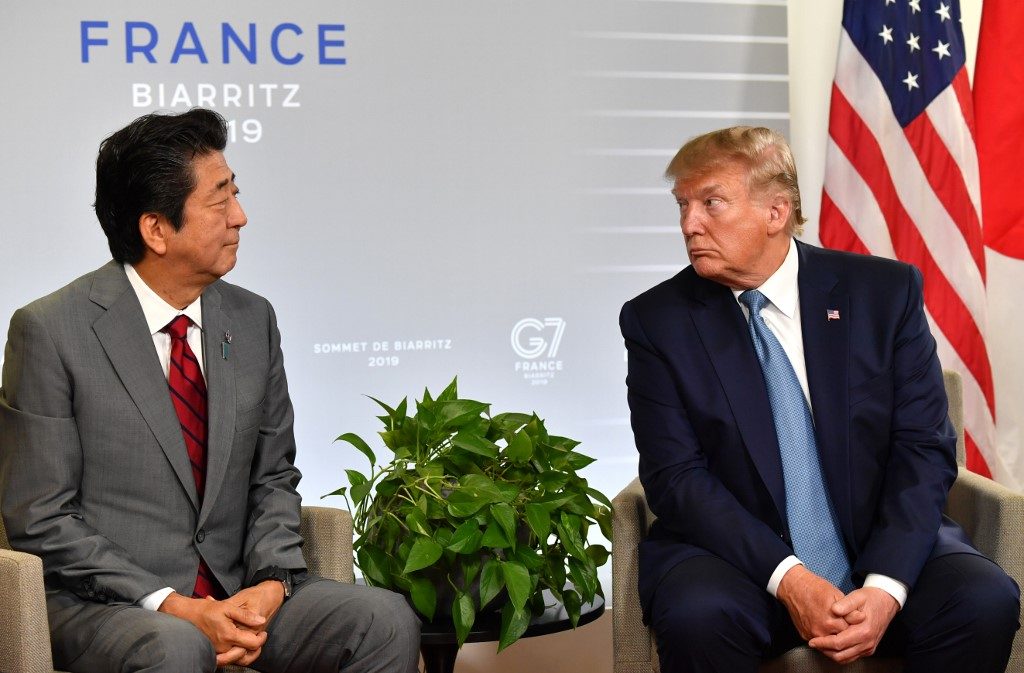 “It’s a very big transaction,” Trump said after talks with Abe on the sidelines of the G7 summit in the French resort town of Biarritz.

“Billions and billions of dollars,” he said.

“It involves agriculture, it involves e-commerce. It involves many things. We’ve agreed in principle.”

Both leaders said they hoped for a formal signing during the UN General Assembly in New York next month.

However, Abe cautioned: “We still have some remaining work that has to be done… mainly finalizing the wording.”

US Trade Representative Robert Lighthizer said the agreement will especially benefit US farmers – a politically important group for Trump in his uphill push for reelection in 2020.

Asked whether US tariffs already imposed on Japanese cars would be scrapped as a result of the deal, Lighthizer said some tariffs would be removed “but not those.”

Trump also said the tariffs were “staying the same” but would not go up.

Trump and Abe enjoy close ties but the US president has frequently claimed that Tokyo has an unfair advantage in bilateral trade.

Negotiators have agreed Japan will place tariffs on US agricultural products up to levels that apply to members of the Trans-Pacific Partnership (TPP) pact, Japan’s public broadcaster NHK and major Japanese dailies reported.

Both sides agreed Japan will cut tariffs on US beef and pork to TPP levels, but will not set new quotas for butter and skimmed milk, NHK said, citing unnamed sources.

Japan has repeatedly said the extent of the opening up of its agricultural market would be within the concession it had made to members of the TPP pact.

After an abrupt US withdrawal from the TPP, 11 countries circling the Pacific last year signed a slimmed-down version of the trade deal, and the pact has been championed as an antidote to growing US protectionism under Trump.

The US president has since sparked fears of a trade war by levying steep tariffs and denouncing unfair trading practices.

The United States will eliminate levies on a wide range of Japanese industrial products, but its tariffs on Japanese automobiles will be left for further negotiations as Trump sees the US trade deficit with Japan as a problem, NHK said. – Rappler.com