Signs of hope as Trump says U.S.-China trade talks back on 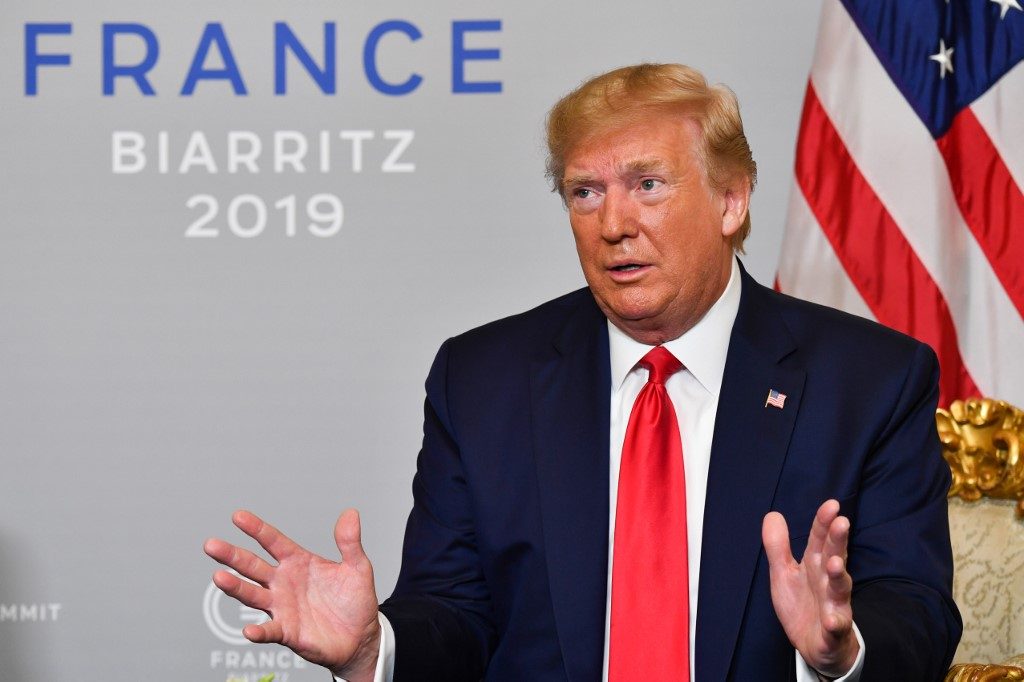 Facebook Twitter Copy URL
Copied
(UPDATED) 'China called last night...said let's get back to the table. So we'll be getting back to the table,' says President Donald Trump, adding that 'they want to make a deal'

BEIJING, China (UPDATED) – There were signs of a thaw in trade-war tensions between China and the US on Monday, August 26, as President Donald Trump said delegations would “very shortly” resume talks and Beijing’s top negotiator called for “calm.”

The two sides have been embroiled in a bruising year-long dispute that has seen tariffs slapped on billions of dollars worth of goods in two-way trade, with the row escalating over the weekend.

But just 3 days after the announcement of further mutual tariff hikes, Trump told reporters at the G7 summit in France’s Biarritz that there had been two “very, very good” phone calls from “high-level” Chinese officials.

He later said talks with China were “more meaningful than at any time” because the United States was doing well while China was “losing millions of jobs.”

Trump’s comments followed moves by China’s most powerful trade negotiator, Vice Premier Liu He, to take the edge off the soaring tensions.

“We are willing to solve the problem through consultation and cooperation with a calm attitude,” said Liu, according to a report by Chinese news outlet Caixin.

“We firmly oppose the escalation of the trade war,” he said, speaking at the opening ceremony of the 2019 Smart China Expo in the southwestern city of Chongqing.

Trump later said “calm” was “very good word to use. It’s not a word I use often.”

The US president also insisted the calls were at “the highest levels.”

“The vice premier is low level? I don’t think so,” he said, seemingly referring to Liu.

US Trade Representative Robert Lighthizer and Treasury Secretary Steven Mnuchin travelled to Shanghai in July for a round of trade talks, where discussions were described as “constructive” but ended with no announcements.

Monday’s detente came after Trump increased tariffs on more than half-a-trillion dollars worth of imports in a new round of punitive measures that are roiling global markets.

The US announcement on Friday, August 23, followed an earlier surprise notification from Beijing that it would introduce fresh tariffs on US goods worth $75 billion.

Some of these measures are due to take effect on September 1, with the rest to follow over the coming months.

On Twitter, Trump also told American firms to start looking for an alternative to production in China – though he and his top aides later downplayed the idea.

Meanwhile Chinese foreign ministry spokesman Geng Shuang said he was not aware of the calls mentioned by Trump and angrily criticized the latest tariffs at a regular press briefing in Beijing.

The US move “tramples on multilateral trade rules, damages the interests of China and the United States, threatens the security of the global industrial supply chain, drags down international trade and world economic growth”, he said.

US allies have pressured Trump at the ongoing G7 summit, saying the trade war is putting the world economy at risk.

China’s currency slid to its weakest point in more than 11 years on Monday amid the ongoing tensions and fears of a global downturn.

The onshore yuan was around 7.1425 to the US dollar in late-morning Asian trading – its weakest point since early 2008 – and by the afternoon it had reached 7.1581.

The yuan, or renminbi as it is also known, is not freely convertible and the Chinese government limits its movement against the dollar to a 2% range on either side of a figure that the central bank sets each day.

The People’s Bank of China has set that rate steadily weaker in recent weeks – allowing the yuan to depreciate, making Chinese exports cheaper and offsetting some of the burden of US tariffs.

US politicians have long accused China of keeping its currency artificially low to increase the competitiveness of its manufacturers.

The yuan breached the key 7.0 threshold against the dollar earlier in August, just days after the US announced its plans to impose tariffs next month on Chinese imports. – Rappler.com