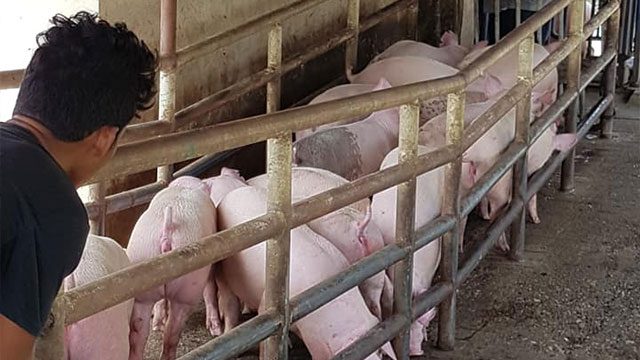 Facebook Twitter Copy URL
Copied
Cebu provincial authorities say they are only allowing the entry of livestock raised in commercial farms in the Visayas and Mindanao. The Negros Occidental shipment were backyard swines.

NEGROS OCCIDENTAL, Philippines – Some 250 live pigs from this province were banned from entering the territory of Cebu province following the scare brought by the dreaded African swine fever.

However, Cebu provincial authorities barred on Tuesday, September 17, the entry of the hogs.

Decena said the trader was prevented from unloading the livestock  because these did not have farm registration papers from the Bureau of Animal Industry (BAI).  The BAI guidelines stipulate that permits will only be given to animals from commercial farms, and not those raised in backyards

He said the livestock passed through a Negros Occidental quarantine officer “who issued the necessary permits to prove the live pigs from Kabankalan were free from ASF virus.”

Cebu, like Negros Occidental, has also banned the entry of pork and pork products from Luzon.

Visayas and Mindanao have so far  remained ASF-free.

Decena said the policy of the Cebu provincial government contradicted with the guidelines of the national government which had no provision which required a farm registration for the shipment of backyard animals.

Decena was concerned that if the live hogs from Negros Occidental are not shipped out to other provinces, it would “flood our supply here.” Negros Occidental supplies hogs to areas such as Manila, Cebu, and Iloilo,

“We have oversupply of market hogs, being the top backyard producer of swine in the country. If there is no demand, the price of live weight will continue to plummet,” he said.

The current glut in market caused by the low demand worries the backyard raisers in the province.

The prices of live weight is pegged at P85 per kilo, he added.

Decena said the national government has to intervene now, following the outbreak of the ASF virus in several areas in provinces of Rizal and Bulacan in Luzon.

“The national government has to ban the transport of pork, pork byproducts, and canned goods from Luzon to Visayas and Mindanao to stop the spread of ASF,” he stressed.

Right now, local government units have implemented their own policies to protect their territories from ASF, he said.

“We need a national policy on the movement and control of the disease so it will not spread to Visayas and Mindanao,” Decena said.

He said the reason why Visayas remained free from ASF was because the LGUs there have implemented proactive approaches to address the outbreak.

The Negros Occidental provincial government has created the ASF task force as early as July to protect its P6 billion swine industry. It’s also the top producer of backyard swine in the country. – Rappler.com