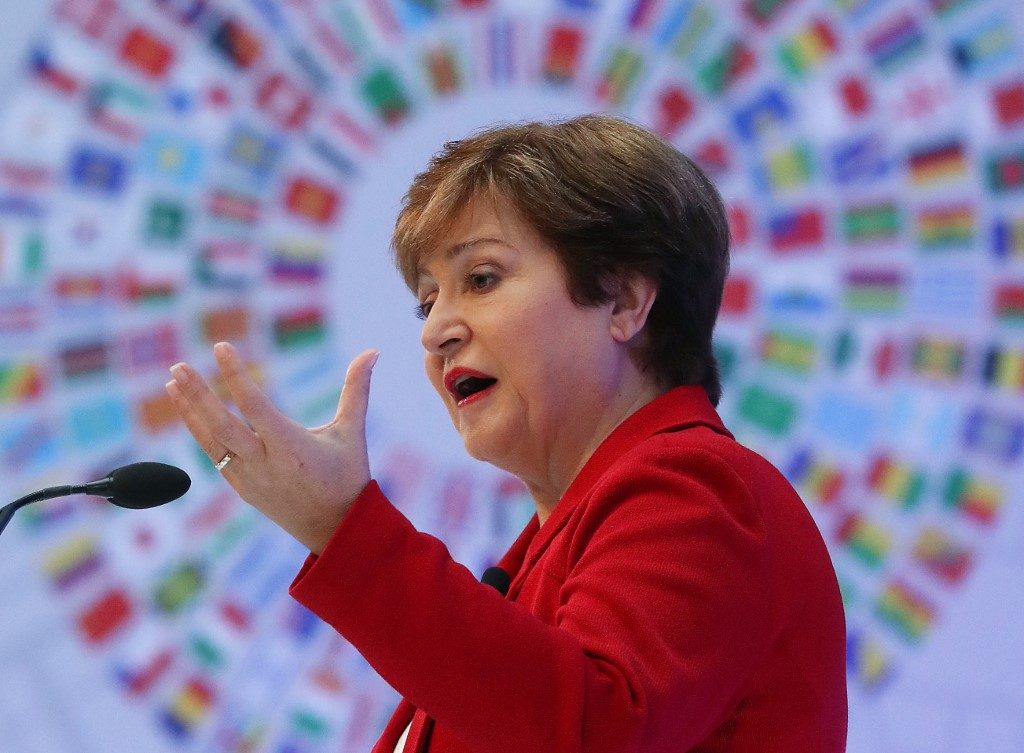 WASHINGTON DC, USA – Grinding trade disputes are undermining the global economy, which is set to see its slowest growth in nearly a decade, the new IMF chief said Tuesday, October 8.

Research shows the impact of the trade conflict is widespread and countries must be ready to respond in unison with cash infusions, Kristalina Georgieva said in her first speech as managing director of the International Monetary Fund.

She also called for a ramp-up in carbon taxes to address the other challenge facing the global economy: climate change.

“In 2019, we expect slower growth in nearly 90% of the world. The global economy is now in a synchronized slowdown,” Georgieva said in a speech ahead of IMF-World Bank autumn meetings next week.

“This widespread deceleration means that growth this year will fall to its lowest rate since the beginning of the decade.”

She said the IMF is cutting its forecasts for growth this year and next. Previously, the world economy had been projected to expand by 3.2% in 2019 and 3.5% in 2020.

The fund is due to release details in its updated World Economic Outlook on October 15.

While trade tensions had been talked about as a danger to the economy, “now, we see that they are actually taking a toll,” she said.

“Global trade growth has come to a near standstill.”

For the global economy, the cumulative effect of trade conflicts could mean a loss of around $700 billion by 2020, or about 0.8% of GDP, she said, which is far higher than the fund previously forecast as its worst case scenario.

That is an amount “approximately the size of Switzerland’s entire economy,” Georgieva said, citing IMF research showing the secondary effects – such as the loss of confidence and financial market reactions – are far greater than the direct economic impact of the tariffs.

“The results are clear. Everyone loses in a trade war.”

President Donald Trump’s trade war with China involves steep tariffs on hundreds of billions of dollars in two-way commerce but there are conflicts with other trading partners as well.

And even if growth resurges next year, some of the “rifts” already caused by the trade conflicts could cause “changes that last a generation,” such as shifting supply chains, she said.

To protect against a sharp global slowdown, Georgieva called on countries with funds available to deploy their “fiscal firepower.”

While some governments are burdened by high debt levels, “in places such as Germany, the Netherlands, and South Korea, an increase in spending – especially in infrastructure and R&D – will help boost demand and growth potential,” she said.

Many economies have been relying on central banks and low interest rates to support economic expansion, she warned that keeping rates low for too long can cause investors to engage in risky behavior.

The IMF estimates that if there were a major economic downturn, “corporate debt at risk of default would rise to $19 trillion, or nearly 40% of the total debt in 8 major economies. This is above the levels seen during the financial crisis,” she said.

Georgieva, who this month took over leadership at the IMF from Christine Lagarde amid rising concerns about the world economy, called on global leaders “to work together, now, and find a lasting solution on trade.”

That includes resolving legitimate concerns over protection of proprietary technology, an issue at the center of Washington’s dispute with Beijing.

Meanwhile, Georgieva said addressing the climate change crisis will require a change in national tax systems that includes a big ramp up in levies on carbon emissions.

“It is a crisis where no one is immune and everyone has a responsibility to act,” she said.

“Limiting global warming to a safe level requires a significantly higher carbon price,” she said, but added that “the key here is to change tax systems, not simply add a new tax.”

At the current average carbon price of $2 a ton, there is little incentive to make a transition to new forms of energy.

These new tax revenues could be used to mitigate damage and “also support investments in the clean energy infrastructure that will help the planet heal.” – Rappler.com