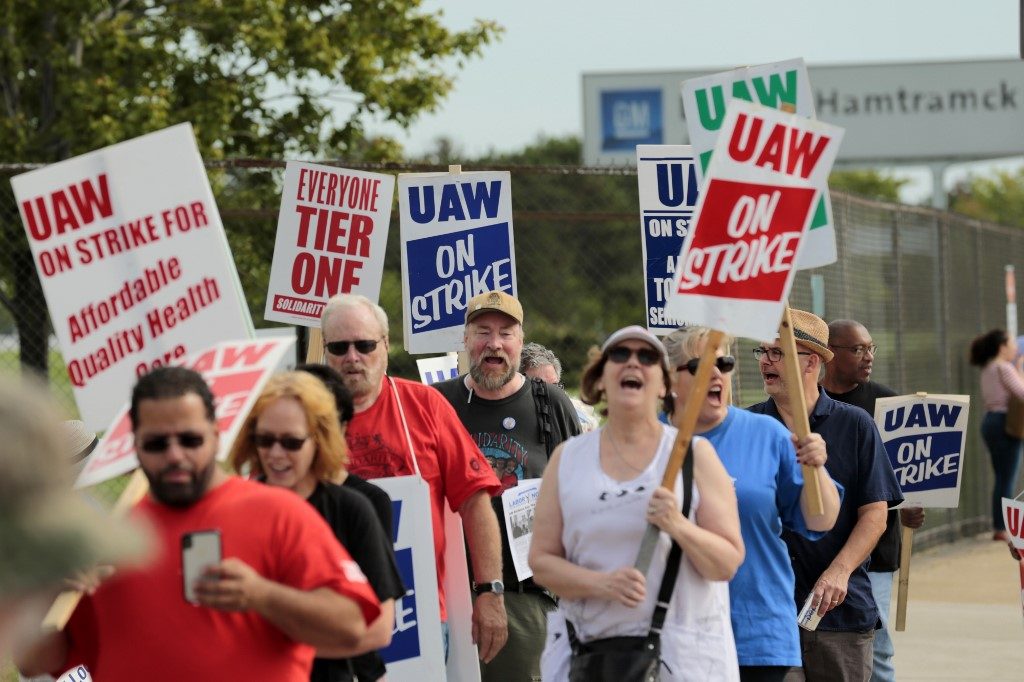 The idling affects companies that supply parts, computer systems, and raw materials to GM at the 31 striking plants in the US, as well as trucking and logistics companies that move items in and out of factories.

The furloughs have come gradually since the strike began on September 16 for members of the United Auto Workers (UAW) Local 659 in Flint, Michigan, said local president Steve Gruener.

In addition to the 1,800 GM employees on strike, another 1,200 workers from supply and trucking firms have been laid off, he told Agence France-Presse (AFP) in a phone interview.

“The hit to the economy is already huge,” said Gruener, a die maker, who said support from local community groups and charities was helping people get through.

“We’re committed to bargaining for a fair and equitable contract for our members,” Gruener told AFP. “We’ll stay out as long as it takes.”

Talks resumed Wednesday, October 9, between GM and the UAW. A strike update from the UAW posted Tuesday night, October 8, emphasized job security. Other key elements of the negotiations have focused on health care benefits and the status of temporary workers.

The strike directly affects nearly 50,000 GM hourly employees, but the ripple effects have grown as the stoppage has persisted.

“What started as a concentrated event affecting a select group of workers has now ballooned in scope,” said Brian Peterson, director of public policy and economic analysis at Anderson Economic Group, a research consultancy.

Anderson said in a report this week that nearly 150,000 workers throughout the auto industry have been affected by the strike, including 25,000 salaried GM workers whose pay level is tied to plant work and some 75,000 employees of auto supply companies.

As of September 30, the Michigan Unemployment Insurance Agency had processed claims from about 5,000 workers at auto suppliers believed to be due to the strike, according to a Michigan government spokeswoman.

Leading supply companies also have significant operations in other states in the industrial Midwest, including Ohio, Indiana, and Illinois. The region contains a number of swing states expected to be critical in the 2020 US presidential election.

Paul Traub, a senior business economist with the Federal Reserve in Detroit, said a rough calculation of the economic hit in Michigan would be around $42 million per week based on lost wages for GM’s 14,000 hourly workers in the state plus another 28,000 or so contract workers.

“The economic impact is starting to be noticeable,” Traub told AFP, adding that the loss of some $2 billion in output will have an incremental impact on gross domestic product estimates.

Some of that lost output is not expected to be made back because GM factories that make top-selling models such as the Chevrolet Silverado were already working flat-out before the strike.

They have no excess production capacity to offset the hit when the strike ends, said Kristin Dziczek, a vice president for industry, labor, and economics at the Center for Economic Research in Michigan.

“That’s a permanent hit to GM’s output,” she said.

The strike is also expected to weigh on results at auto supply companies, prompting Wall Street analysts to slash profit forecasts for leading companies such as Magna, a Canadian company that lists GM as its biggest customer, accounting for 15% of sales.

“We remain encouraged that both sides are continuing to work towards an agreement,” said a Magna spokesman.

“While we attempted to keep our employees at these impacted plants working as long as possible through training, maintenance, and inventory, a few of our GM-dedicated plants are now idle,” he said.

“We are continuing to monitor the situation and we remain hopeful for an amicable resolution.”

Other companies expected to see a big hit include American Axle & Manufacturing, which relied on GM last year for 41% of company revenues, and Lear, which garnered 18% of its revenues from GM.

Lear is monitoring the talks and “hopeful an amenable solution is soon reached that is beneficial to all parties,” a spokeswoman said.

“Our UAW employees at impacted facilities are unable to work due to lack of production volume.”

American Axle did not respond to requests for comment. – Rappler.com