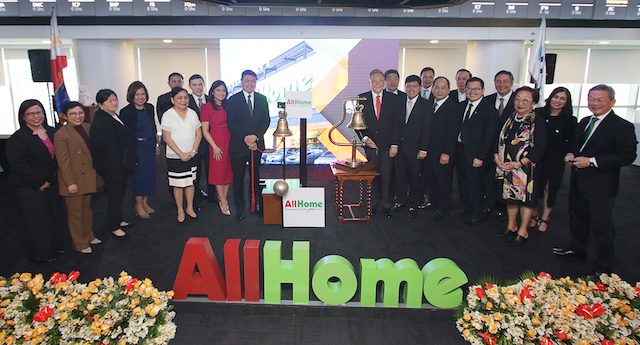 MANILA, Philippines – Billionaire Manny Villar‘s AllHome gained some 0.5% on its first day of listing at the Philippine Stock Exchange (PSE) on Thursday, October 10.

AllHome’s IPO is the biggest listing the local bourse has seen since Pilipinas Shell in 2016.

NOW: listing ceremony of Manny Villar’s AllHome. This is the PH’s biggest IPO in recent years. It raised $250 million. @rapplerdotcom from @PhStockExchange pic.twitter.com/FMsXBGzU2p

“Shares were trading relatively sideways for most of the session. However, investors bought up in the afternoon when the company disclosed future plans,” said Luis Limlingan of Regina Capital.

Camille Villar, AllHome vice chairperson, said in an interview with ANC that the company aims to double its market share to over 14% in just a year after going public.

All counters were also in the green, with properties gaining the most by 1.3%.

There were 93 advancers, while 78 declined and 53 were unchanged. More than 1.36 billion shares valued at P14.46 billion changed hands.