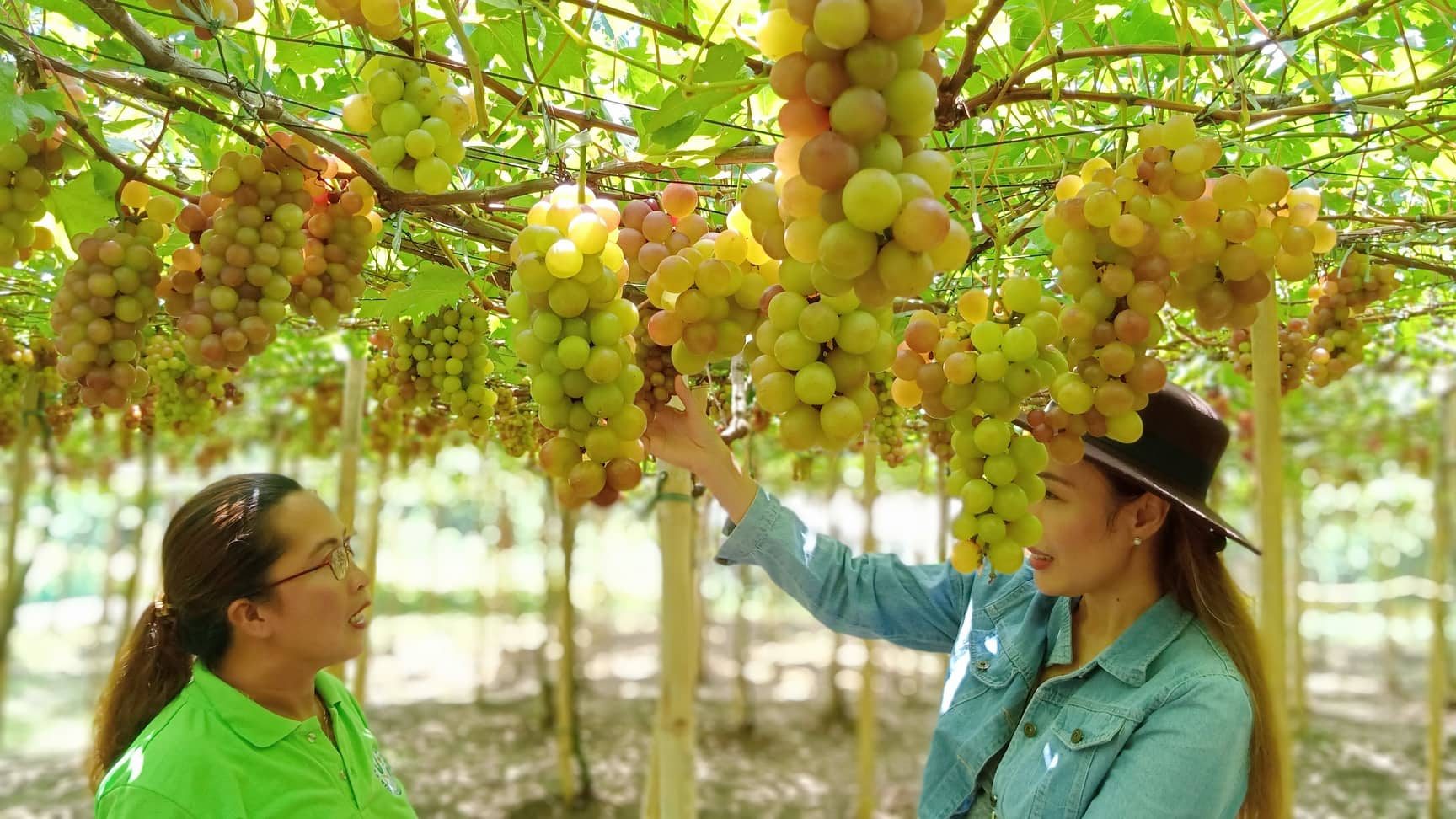 ALBAY, Philippines – After going down the winding roads of the remote village of Macabugos in Libon, Albay, one would finally reach the source of pride of local couple Maximo and Rosemari “Rose” Sasutona and perhaps even the village itself: a bustling agritourism farm where their unproductive riceland used to be.

Rose and Maximo, both in their 40s, decided to convert about a hectare of their 4-hectare riceland for agritourism 3 years ago, after erratic weather made the rainfed land unsuitable for rice planting. After reconditioning the soil, the couple decided to try grape farming.

“We could no longer till the land completely due to lack of rain, and if ever we’ve planted palay, the harvest is not profitable or productive anymore due to lack of rain and changing weather condition which was also aggravated by the infertile soil. So we decided to plant grapes as trial, if it will survive as substitute to palay,” said Rose.

She said a vineyard in La Union that they had visited years ago inspired them to consider pursuing the same venture. They ignored villagers who mocked their project.  (READ: In La Union, farmers let tourists pick grapes)

“We started in 2015. We bought 300 cuttings of grapes in La Union. We conditioned it for a week to acclimatize before being transplanted,” Rose said.

But a few months after the grape cuttings were planted, Typhoon Nona (international name: Melor) swept parts of the country, including the Bicol region. The typhoon completely ravaged the cuttings, which were just beginning to grow.

Undeterred, the couple tried again. Weeks later, in January 2016, they went back to La Union and bought 500 grape cuttings this time, at P10 each. At the time, they were told that the vines would start bearing fruit in a year.

“We planted the 500 cuttings but for 3 years, it did not produce any single fruit…. So we asked the assistance of a technician in Bauang, La Union, to help and teach us how the grapes can bear fruits,” Rose recalled. The new method of pruning they learned from the La Union technician showed results. In a few months, the grapevines finally started bearing fruits and they had their first harvest from May to June 2019.

“We’re completely happy after seeing the grapes in its fruiting stage after 3 long years of waiting,” Rose said.

The Sasutonas harvested 163 kilos of grapes, sold for P375 per kilo. Their second harvest season began in October.

“After harvesting, we will prune the vine totally in preparation for the next fruiting season probably in summertime,” Rose said.

The Sasutona couple’s grape farm in Albay, known as the Villa Miranda Farm and Resort, has become a popular agritourism destination. The farm charges a P50-entrance fee which is on top of the grape-picking charges.

Other crops can be seen at the farm including organic vegetables, strawberries,  fruit-bearing trees, cacao, and coconut trees.

It is patronized by tourists mostly from the Bicol region. Rose said there have been weekends when the farm gets as much as 500 visitors.

Antonio Rabe, the Department of Agrarian Reform’s municipal agrarian officer in Libon, lauded the Sasutonas for their unproductive land into an agritourism business that provides livelihood to the community as well. The Sasutonas are both high school graduates. Rose worked as a househelper for 4 years while Maximo worked in a trucking firm for 3 years.

Their luck turned when they met an old businessman, Ed Sacay, who owned heavy construction equipment. Rose said Maximo reconditioned the vehicles of Sacay, who later gifted them with a truck. This helped them start a trucking business.