Nov 2, 2019 10:33 PM PHT
Agence France-Presse
Facebook Twitter Copy URL
Copied
'If you go alone, you will be bullied. We don't want to go into trade war but sometimes when they do things that are not nice to us, we have to be unnice to them,' says Malaysian Prime Minister Mahathir Mohamad of US protectionism 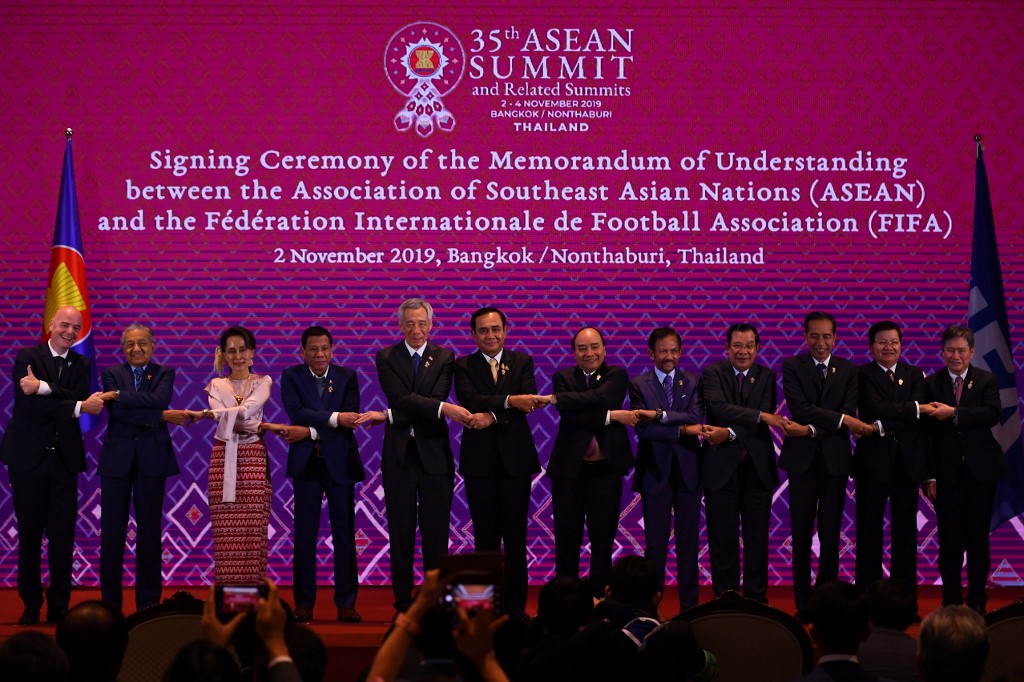 BANGKOK, Thailand – Southeast Asian leaders met Saturday, November 2, in Thailand eyeing a breakthrough in talks over the world’s largest trade deal to help throw off the torpor which has gripped the global economy since the start of the US-China tariff war.

The 10-member Association of Southeast Asian Nations (ASEAN) opened their annual summit in Bangkok hoping to secure a China-backed free trade pact knitting together half of the world’s population and around 40 percent of its commerce.

The Regional Comprehensive Economic Partnership (RCEP) – a deal spanning India to New Zealand and wrangled over for several years – is now seen as an urgent counterpoint to US protectionism.

Washington’s trade rumble with Beijing has weighed on markets, with the IMF warning the spat could cut global growth to the lowest pace in more than a decade.

Meanwhile President Donald Trump’s protectionist rhetoric has spooked some ASEAN nations who fear their economies could fall under his crosshairs.

Trump has repeatedly warned of further intervention to protect American business and several Asian nations are waiting to find out if the US will put them on a watch list of “currency manipulators”.

Malaysian Prime Minister Mahathir Mohamad warned the regional bloc could hit back against any punitive trade measures, skirting over specifics.

“We will do exactly what Trump does,” he told a business forum ahead of the summit opening, calling the US leader “not a very nice man”.

“If you go alone, you will be bullied. We don’t want to go into trade war but sometimes when they do things that are not nice to us, we have to be unnice to them,” he added.

Earlier his Thai counterpart, Prayut Chan-O-Cha, echoed the theme of regional cooperation on the RCEP deal, while Philippines’ trade secretary Ramon Lopez said he hoped to have a “very positive report (on RCEP) come Monday” when the summit ends.

India, whose Prime Minister Narendra Modi is also in Thailand, is the greatest obstacle to RCEP in its current form.

Indian intransigence has cast the deal – looping in the 10 Southeast Asian economies along with Japan, India, China, New Zealand and Australia – into doubt.

“We want them (India) to be in. We want to have them… they are a big economy,” Lopez told reporters.

Chinese premier Li Keqiang will attend the 3-day meet, where simmering tensions in the South China Sea will also lead the agenda.

China supports RCEP, a deal seen as a way for Beijing to assert its trade dominance in its Asian backyard after the US pullout of the Trans-Pacific Partnership (TPP) in 2017.

The ASEAN summit follows a push by Washington and Beijing for a partial agreement to squash some of tit-for-tat tariffs on billions of dollars worth of goods that have rattled both economies.

But Washington has pared back its delegation to Bangkok this year.

In what is being read by some as a snub to ASEAN, the US is sending national security advisor Robert O’Brien and commerce chief Wilbur Ross.

US Vice President Mike Pence attended last year’s ASEAN summit in Singapore, and President Donald Trump was at the 2017 meeting in the Philippines.

A senior White House official refuted claims of a snub to the Southeast Asian bloc.

Both Trump and Vice President Mike Pence are unavailable because they will be “very engaged in campaigning” for a string of governors’ races, the official told reporters.

Trump instead trusts O’Brien “to go out and take care of big problems and small problems”, the official added. – Rappler.com