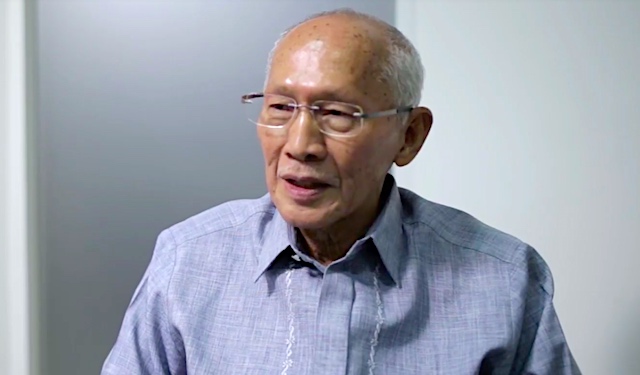 MANILA, Philippines – Friends and former co-workers in government paid tribute to former finance secretary Ernest Leung who died on Friday, November 15, at the age of 80.

Media reports quoted Finance Secretary Carlos Dominguez III confirming that Leung died at noontime on Friday, after spending days in a hospital for malaria. He reportedly contracted the disease during a trip to Papua New Guinea.

Rafael Alunan III, who was interior secretary when Leung served the administration of President Fidel Ramos as finance secretary from 1993 to 1994, was among those who paid tribute to Leung on social media shortly after learning about his death.

“Sad news indeed. Hale and hearty at 80, he was indestructible and looking ready for another 80. Adventurous, too, who loved exploring the wonders of Nature in our country and abroad,” Alunan said in a Facebook post.

“Tough as nails, straight as an arrow, and a real patriot. One of a kind. Our loss, Heaven’s gain. Ernest, you will be truly missed,” he added.

In that thread, former ambassador Victoria Bataclan said: “Rest in glorious peace my esteemed senior colleague. The only one licensed to lecture me viciously on the merits of a South Bank in a war zone in Baghdad!”

“A loss to the financial sector,” Magno said in another thread in a Facebook post about Leung’s death.

People who used to work under Leung in the agencies and offices he helmed also conveyed their condolences to the Leung family and paid tribute to their former boss.

A former Philippine Stock Exchange employee recalled in Filipino that Leung “was strict but an excellent” leader when he was PSE president.

“One of the best, if not the best-loved,” another said of Leung’s stint as president of the Philippine Deposit Insurance Corporation (PDIC).

“We all remember him as a very witty man, full of humor, strict taskmaster,” said another.

Leung, a former member of the Monetary Board, served the government for nearly 4 decades and served in top posts at  the National Food Authority Council, National Development Company, and the Development Bank of the Philippines, among others.

After government service, he was active in non-governmental organizations such as the Philippine Economic Society, and the Foundation for Economic Freedom.

He was also active in pushing for measures he favored, and joined former government officials in urging lawmakers to pass them,  such as the imposition of higher excise taxes on alcohol and tobacco products.

There will be memorial mass for Leung at 7 pm on Tuesday, November 19,  at the Christ the King Church in Green Meadows. – Rappler.com