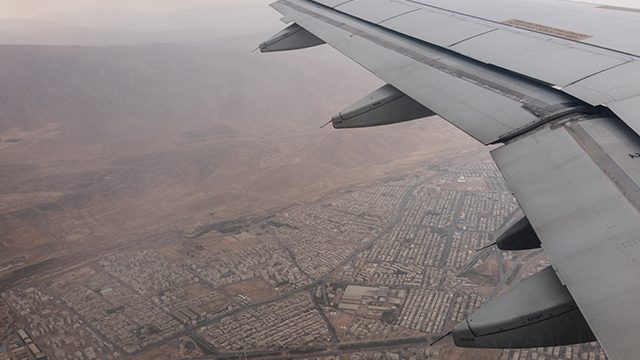 Facebook Twitter Copy URL
Copied
(UPDATED) Shortly after the missile attacks, the US Federal Aviation Administration says it is banning US-registered carriers from flying over Iraq, Iran, and the Gulf

Lufthansa and its Austrian Airlines unit nonetheless decided to maintain flights to the Iranian capital, Tehran, this week, a statement said.

Iran launched more than 20 missiles at bases housing US troops in the early hours, officials in Washington and Tehran said.

In Germany, Lufthansa said it had halted overflights of Iran and Iraq until further notice.

But it added that “since Tehran Airport is open and there are no security restrictions for the approach route or the area around the airport, Austrian Airlines will operate today’s flight OS 871 to Tehran with a delay of around 6 hours.

Lufthansa said it had cancelled a flight scheduled Saturday, January 11, to the northern Iraqi city of Erbil.

Meanwhile, the US Federal Aviation Administration banned US-registered carriers from flying over Iraq, Iran and the Gulf, citing the potential for “misidentification” of aircraft.

Its Russian counterpart, the Federal Air Transport Agency, said it was recommending that airlines avoid the air space over Iran, Iraq and the Persian and Oman Gulfs “due to information about current risks for safety of international passenger flights.”

The region is a central corridor for flights between Europe and Asia, but aircraft can be rerouted fairly easily.

An Air France spokesman told Agence France-Presse, “Air France has decided to suspend until further notice all flights through Iranian and Iraqi airspace.”

Vietnam Airlines said it would make “appropriate adjustments” to routes to avoid areas of potential instability although its regular flight paths to Europe do not pass over Iran and Iraq.

Japanese airlines ANA and JAL, and Hong Kong-based Cathay Pacific said their planes do not fly through airspace affected by latest flare-up.

Bahrein Airways and Kuwait Airways had already suspended flights to Iraq shortly after Soleimani’s assassination, and on Tuesday, January 7, EgyptAir said it would as well, for 3 days. – Rappler.com