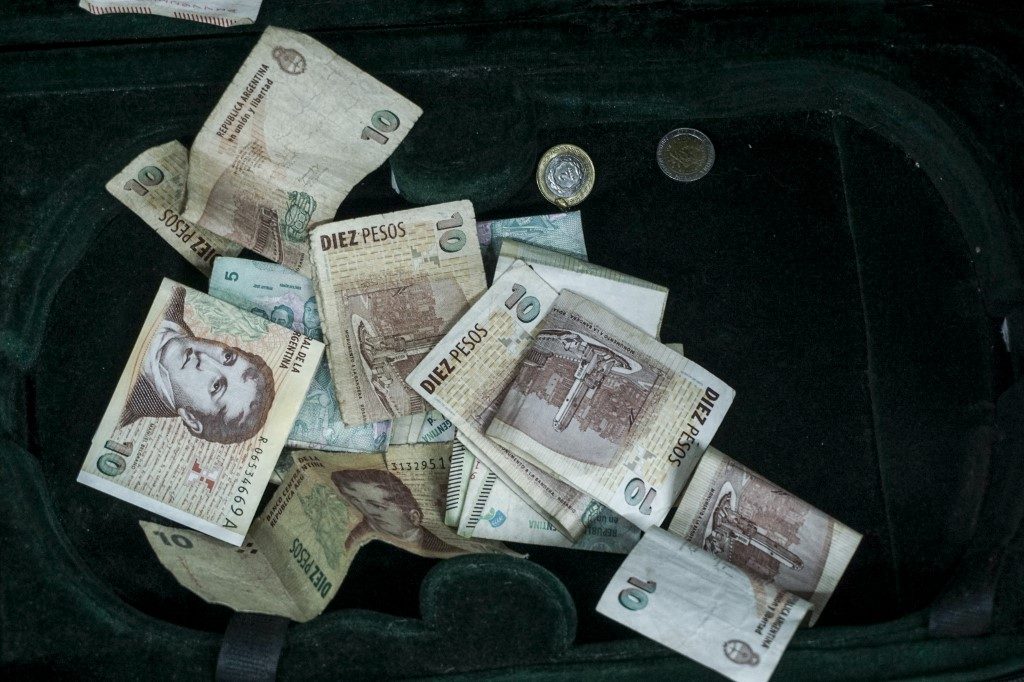 BUENOS AIRES, Argentina – No sooner does she receive her paycheck in Argentine pesos than 43-year-old lawyer Eugenia exchanges them for dollars and takes them home to hide away.

The fear of losing everything in a burglary pales in comparison with the mistrust she has for banks and her own country’s currency.

“I don’t trust the peso; it’s not just now, it’s always been that way,” she said.

Bludgeoned by an 8th major financial crisis since 1950, many Argentines prefer to seek refuge in the United States dollar as a form of savings they can hide “under the mattress.”

Eugenia actually hides hers in the bathroom.

“I’d rather be robbed by a thief than a bank,” she said.

There’s nothing new about this mistrust.

“Historically, things didn’t go well for those who tried to save in pesos,” said Matias Rajnerman, chief economist at consultants Ecolatina.

“Those who did so in dollars, did well. It’s the consequence of a broken financial system.”

For 18 months Argentina has been in a recession provoked by a currency collapse.

The poverty rate in the country of 44 million is over 40%, inflation is around 55%, and unemployment has risen over 10%.

One of the country’s major problems is its citizens’ mistrust of the peso, which has deprived the government of much-needed dollars.

No faith in the peso

When the new government of center-left Peronist Alberto Fernandez came to power, it moved to combat currency flight by slapping a 30% tariff on foreign currency purchases and maintaining the previous government’s purchase cap of $200 per month.

Ahead of Fernandez’s assumption of power, 52-year-old interior decorator Sofia withdrew all her dollar savings.

Fernandez’s measures appear to be working, as the peso has stabilized at 63 to the dollar. The exchange rate was 18 to the dollar before the currency crash.

However, a black market exchange, with a rate of 83 to the dollar, has seen a surge in transactions due to the monthly limit on purchasing dollars.

But experts say it’s unlikely Argentine faith in the peso will grow.

“In this country there’s a systematic history of violating the saver’s legal security,” said Rajnerman.

“Private savings end up being seized by the government or exchanged into bonds. It happened several times, it happened in 2001,” when Argentina suffered its worst economic crisis in modern times as it defaulted on a $100-billion debt.

It was the year that then-president Fernando de la Rua limited Argentines to withdrawing 250 pesos (then worth $250) a week from banks.

De la Rua inherited a ticking time bomb from the government of Carlos Menem (1989-1999) who had linked pesos to the dollar.

Since then, many Argentines have hoarded their dollars outside the country.

However the government plans to increase taxes on personal and foreign assets, while also imposing tariffs on those who take their savings out of Argentina.

According to the country’s central bank, Argentines are holding $300 billion of savings in foreign accounts in the US and Switzerland, among other places.

But economists say this dollar flight causes a vicious cycle.

“If we keep dollars under the mattress or take them out of the country, it reduces the financial system…and that makes it difficult to turn things around,” said Rajnerman.

Financial uncertainty has led to a spike in requests for safe deposit boxes in banks, some of which even have waiting lists.

“But I didn’t get it, many people got there before me,” she said.

The desperation to escape from government controls, taxes, and the banks has led many Argentines to emigrate, despite their country being one of the richest in the world in terms of natural resources.

“In Argentina, no one respects your money,” said a 40-year-old businessman who moved with his family to Uruguay and declined to give his name. – Rappler.com