One worker at a time, virus-hit China’s factories sputter back online 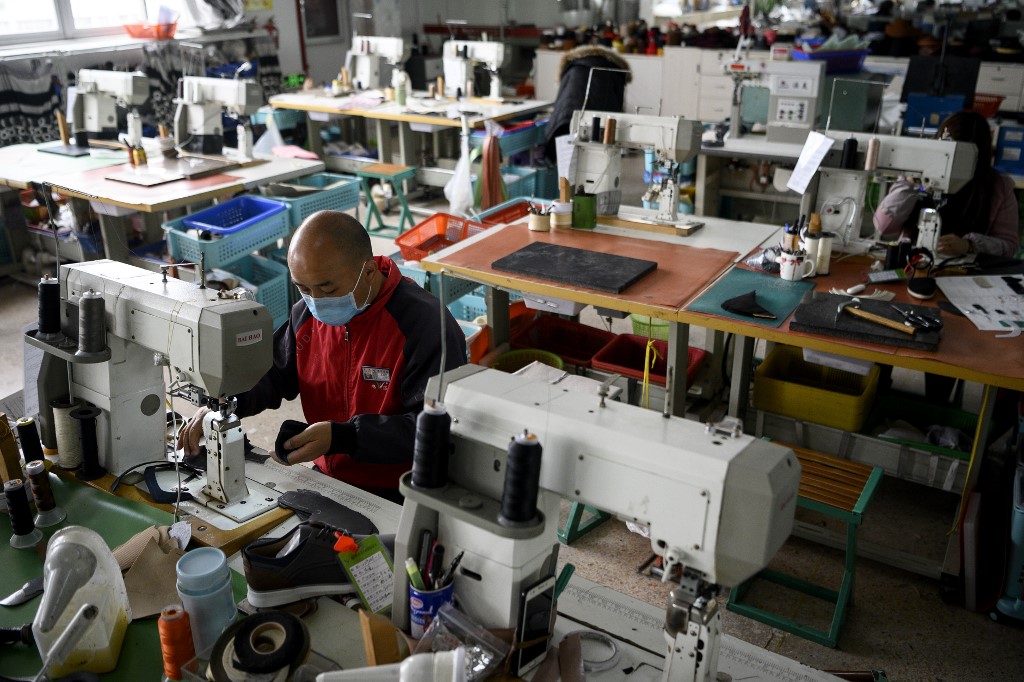 WENZHOU, China – The Xuda Shoes Company is usually bustling at this time of year, with workers having long returned from a Lunar New Year holiday in their hometowns to kick-start production of tens of thousands of shoes daily.

But China’s coronavirus epidemic has changed all that.

Only about one-third of the roughly 1,000-strong workforce at Xuda’s factory in the eastern export hub of Wenzhou are around, the rest blocked by virus-induced travel disruptions and safety measures.

Getting back to full annual capacity of 7 million pairs of shoes could take several more weeks, company officials said.

The situation in Wenzhou, a trade entrepot for centuries and now a major producer of much of the world’s shoes, eyeglasses, and clothing, reflects the slow progress in fully reviving China’s economy, the world’s second largest and an indispensable lynchpin of global growth.

China’s economy remains rooted in manufacturing, much of that for export, and heavily reliant on countless laborers from the vast interior who had returned home in January for the most important Chinese holiday before the epidemic hit, killing more than 2,800 people and infecting around 80,000.

“Factories that want to restart are short of labor. Wenzhou’s economy will definitely be impacted,” Yang Wenjiang, a top manager with Xuda Shoes, told Agence France-Presse during an interview at the factory.

“If you don’t have workers, you can’t produce. If you can’t restart, you can’t fill orders.”

The virus shut down provinces responsible for most Chinese economic output, including Zhejiang where Wenzhou is located.

With concern rising over the impact on global growth, the world is watching how quickly Chinese factories can be brought back online.

Adding to the unease, official data released Saturday, February 29, indicated Chinese manufacturing activity in February was the lowest on record.

But you don’t need numbers to convince anyone in Wenzhou.

The city is one of the worst-hit by the contagion, with 504 cases of coronavirus infections and one death as of Saturday, compared to 337 infections in far larger Shanghai up the coast.

Consequently, tough restrictions on residents’ movement were imposed in Wenzhou and other major Zhejiang cities, with fear of outsiders further complicating the return of laborers.

The coastal city, with around 3 million people in its urban core, remains subdued, with scant road traffic and most businesses shuttered.

But it resembles a ghost town, with most factories closed or barely operating, streets empty, and row upon row of supplier businesses shuttered and silent.

The short-staffing at Xuda allows ample room for workers to obey new factory requirements to spread out in the canteen at lunch to avoid potential virus transmission.

Officials in Wenzhou and other Chinese manufacturing regions have begun offering tax relief, lower-interest loans, and are chartering buses and trains to retrieve workers from their homes in less-developed provinces.

“When I first arrived back at my home, I heard the epidemic situation was serious, and I was worried I would not be able to leave again,” said Wang Changwen, a 28-year-old Xuda worker who arrived back in Wenzhou last week from his hometown in Guizhou province aboard a company chartered bus.

More trickle back daily, but there is concern about reductions in worker salary remittances upon which many rural communities depend.

“My fellow villagers are worried. This has reduced income to the economy (of his village),” Wang said.

Wenzhou businesses insist workforces are growing daily and the impact will be temporary, helped by the annual stockpiling of orders and supplies before the Lunar New Year to cushion the annual holiday disruption.

Wang Jin, co-owner of local eyewear manufacturer Azure Eyeglass Company, said his factory is nearing 50% normal capacity and hopes to be at 90% by late March.

“If we can control all of the negative impact to 15% [of annual revenues] we will be happy,” said Wang, 43.

“Some of my supply-chain contractors are already in the same situation as us, trying to recover to 20%, 30%, 40% [of capacity]. I think people are moving, not waiting.”

With the virus spreading rapidly overseas, he fears longer-term foreign demand will be depressed and hopes cost savings from recent investments in automation will ease the blow.

China’s government has released figures showing that a majority of auto factories and other major industries were running again.

Independent analyses, however, say only about one-third of the nation’s factory workers had returned by late last week. (READ: In virus-hit China, coat maker adapts to make hazmat suits)

But he expects only a temporary impact as Beijing ramps up policy supports and as Chinese manufacturers continue a long-term climb up the value chain.

“This shouldn’t be a very long-term thing for China,” Schell said. “It’s so set up for success already that one trip won’t make it fall over.” – Rappler.com