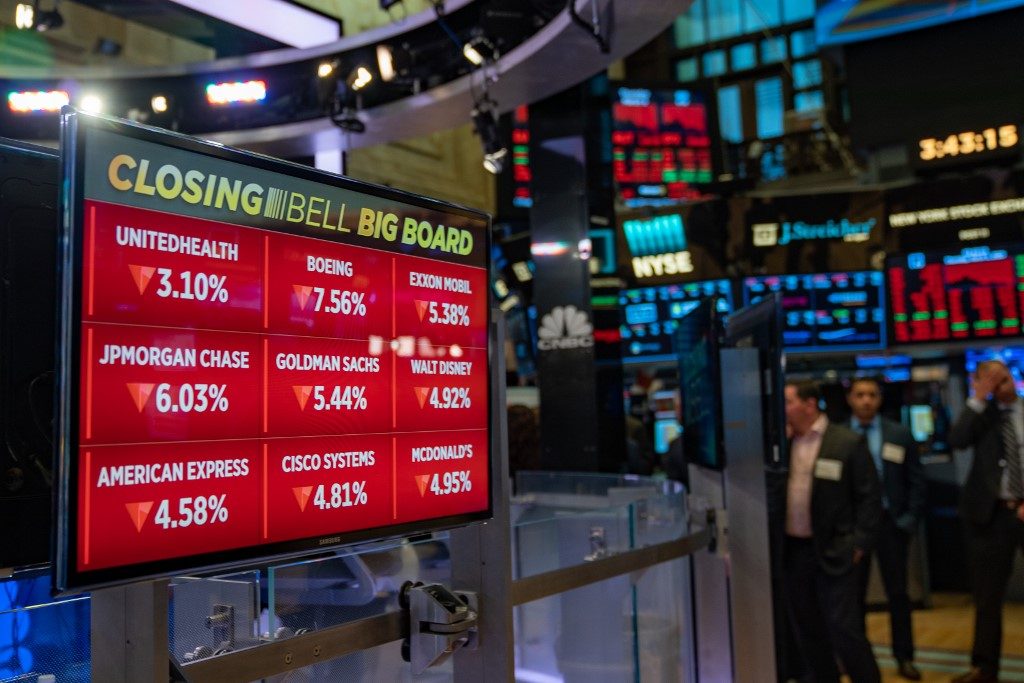 Facebook Twitter Copy URL
Copied
'On a week that has seen extraordinary action taken to stem the flow of pessimism, we are yet again heading towards the weekend surrounded by a sea of red,' says market analyst Joshua Mahony

The Dow experienced its latest violent swoon – this time falling around 970 points or 3.6% – as investors assessed the growing possibility the spreading coronavirus could ultimately depress the consumer-focused US economy.

European stock markets also fell sharply, while the dollar pulled back against major currencies. (READ: Out of ammo? European Central Bank on the spot in coronavirus fightback)

“On a week that has seen extraordinary action taken to stem the flow of pessimism, we are yet again heading towards the weekend surrounded by a sea of red,” said market analyst Joshua Mahony at online trading firm IG.

“What was largely a Chinese issue just a month ago has turned into a global crisis that threatens to throw the world economy into recession.”

Among the virus-related cancellations announced Thursday, Russia called off the St Petersburg International Economic Forum, its main business showcase set for June, while Italy said its sporting events will be held behind closed doors until April 3.

Across the world, 3,345 people have died from the virus and there have been 97,510 infections in 85 countries and territories.

US economic data thus far has not shown much of a hit from the coronavirus, but the market fears what is coming down the road.

“The market can factor in bad news if we have the data, but it’s difficult dealing with uncertainty,” said Quincy Krosby, chief market strategist for Prudential Financial.

“If customers are afraid to go out, shopping, to dinner, then you see consumer spending going back and then you start seeing layoffs from small and midsize business owners,” Krosby said.

Airlines swooped lower on gloomy industry forecasts on the back of the coronavirus – and after the collapse of British regional airline Flybe.

The world’s airline sector could lose up to $113 billion in revenue this year due to the impact of the coronavirus, the International Air Transport Association (IATA) warned.

Oil prices finished lower after ministers from the OPEC cartel of oil-producing countries recommended a drastic production cut of 1.5 million barrels per day to their allies to counter a slump in demand caused by the coronavirus outbreak.

However, it remains to be seen whether the OPEC+ states – Russia in particular – will be prepared to countenance such a large cut when they join the meeting of the Organization of the Petroleum Exporting Countries on Friday, March 6.

Meanwhile, the dollar retreated against the euro, pound, and yen, the latest ripple effect from the US Federal Reserve’s emergency interest rate cut announced on Tuesday, March 3.

Markets will be watching Friday’s US employment report, but BK Asset Management’s Kathy Lien said the greenback was unlikely to get much of a boost.

“Investors will see a soft number as justification for further easing by the Federal Reserve,” Lien said. “A strong number on the other hand will be dismissed as being delayed and not reflecting the true impact of coronavirus.” – Rappler.com