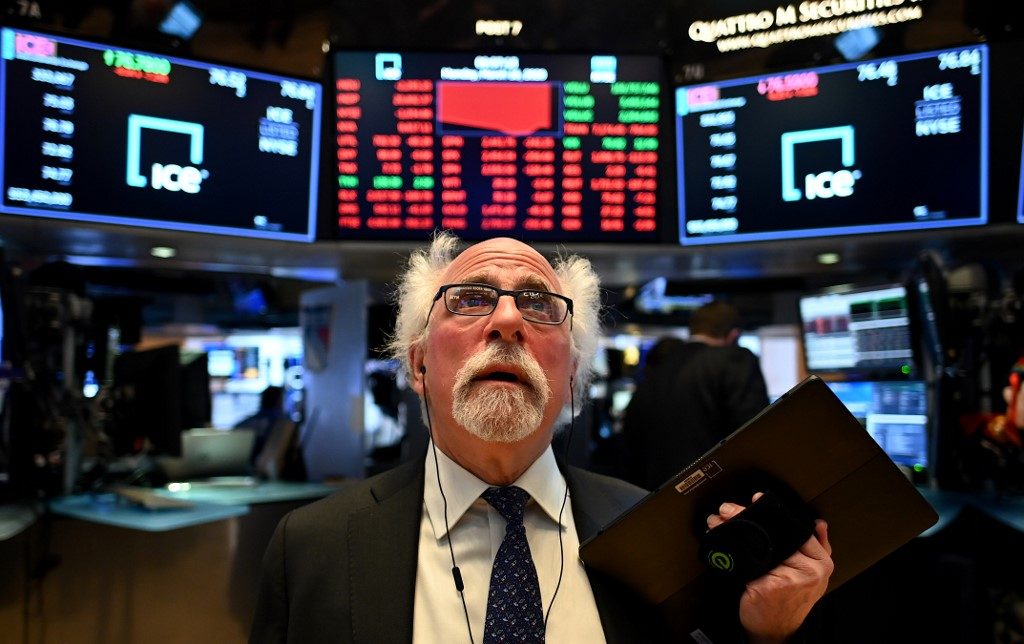 The Fed acted again on Monday, with its New York branch announcing another $500 billion in cash injections on top of a massive liquidity and bond-buying program unveiled in recent days, and the Bank of Japan also announcing new bond purchases.

G7 leaders meanwhile pledged to “do whatever it takes” to protect the economy, and US President Donald Trump acknowledged the world’s largest economy “may be” headed into recession.

But traders were unimpressed, and with the virus showing no sign of letting up, World Health Organization chief Tedros Adhanom Ghebreyesus said it was impossible to tell when it would peak globally.

That sent Wall Street indices to their worst day since 1987, with the S&P 500 and Nasdaq dropping about 12% and the Dow sinking nearly 13%.

In Asia-Pacific, Sydney’s stock market had its worst daily drop on record, falling 9.7%.

Shanghai shed 3.4% after the scale of the crisis was laid bare by data showing Chinese industrial production for January and February shrank 13.5%, the first contraction in around 30 years.

Tokyo ended 2.5% lower, after a rally sparked by the Bank of Japan’s support measures announcement fizzled, while Europe’s main markets were down around 10%.

“The aggressive rate cut and stimulus package from the Fed last night acted as a warning signal to the markets,” said CMC Market’s UK analyst David Madden, giving off “the impression they, the Fed, are nervous, and traders have picked up on that.”

Fears are also rising that the Fed may have reached the limit of its power to fend off recession as the coronavirus nears.

“We’re navigating blind as no one truly knows how long this is going to last, let alone what the full consequences are going to be,” Oanda analyst Craig Erlam told Agence France-Presse (AFP).

Pressure on G7 to act

Equity markets have been whipsawed by the disease, which has now infected almost 170,000 people and killed more than 6,000 with several countries going into lockdown as Europe becomes the new epicenter of the outbreak.

But Trump said the crisis should wash through the economy by August, after which there will be a “tremendous surge in the stock market.”

Oil prices continued their nosedive as a price war between major producers Saudi Arabia and Russia added to sliding crude demand caused by the virus.

Airlines were among the biggest losers after slashing capacity, with British Airways-parent IAG crashing 27% and Lufthansa off by 12%. US airlines made a plea for a $50-billion government bailout, warning of vanishing liquidity.

The auto sector also slid as manufacturers Fiat Chrysler, Peugeot-Citroen, and Renault said they were halting some if not all production. Some FCA workers at a truck plant in Michigan staged a walkout amid concerns about the virus.

The G7 emergency leaders meeting was a sign of global cooperation but there was little in the way of specifics offered, unlike the actions taken during the 2008 global financial crisis.

Stephen Innes, global chief markets strategist at AxiCorp, said the pressure was on G7 leaders to find a way to end the carnage.

“The G7 needs to come up with a convincing roadmap and remove markets from peril’s path, by at minimum curtailing short-selling, if not a complete shutdown until the virus data is better understood,” he told AFP.

Innes said leaders should consider closing markets when they hit the triggers for automatic trading pauses.

“Volume is low and volatility high, and the ultimate losers are hard-working folks’ retirement plans and those whose planned retirement move to the beach got pushed back another 5 or 10 years,” he said. – Rappler.com