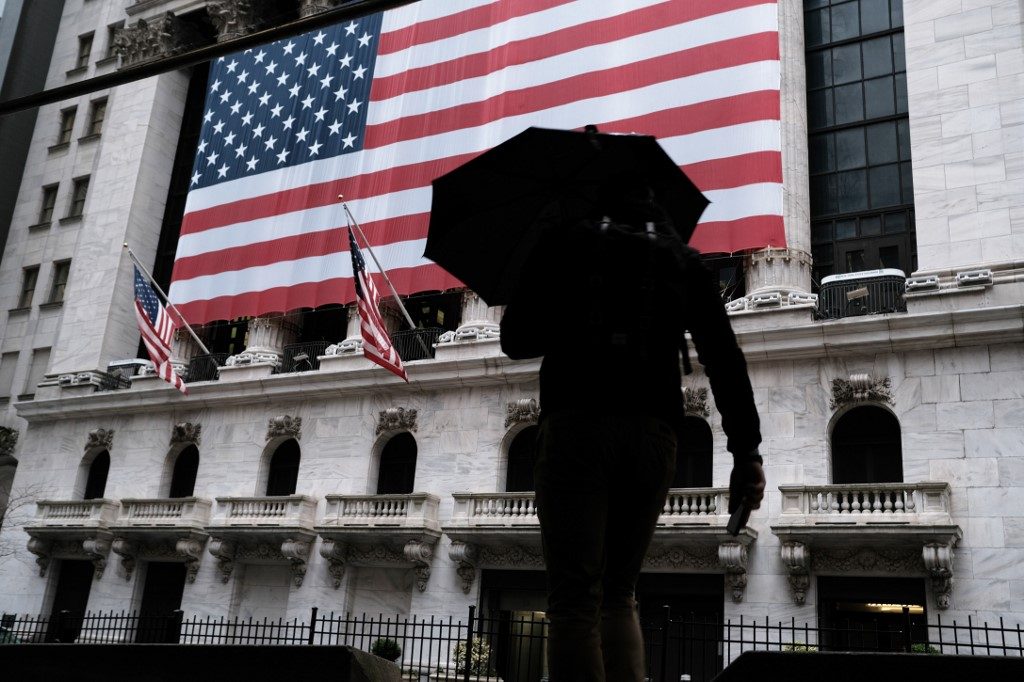 Facebook Twitter Copy URL
Copied
A day after shedding almost 3,000 points, the Dow finishes up 5.2% or around 1,050 points on Tuesday, March 17

European bourses also climbed higher, with both France and Spain announcing tens of billions of euros in aid, while oil prices fell further on a worsening demand outlook.

“Today’s bounce was much needed to ease the panic among investors, but the uncertainty remains very high, and bulls should be ready for more volatile swings,” said Gorilla Trades strategist Ken Berman.

“While it’s hard to judge the effectiveness of the proposed stimulus plans, the quick and decisive action by global governments and central banks seem to have reduced ’systemic’ risks today, and the restored trust could be vital for stocks in the coming weeks.”

With some of Europe’s biggest economies on lockdown and major centers in the United States such as New York and San Francisco also ramping down, governments are eyeing a massive push to prop up companies and avert deep layoffs.

The Trump administration is reportedly considering as much as $1 trillion in stimulus to boost the consumer-driven US economy as activity grinds to a standstill at many restaurants and shops.

US Treasury Secretary Steven Mnuchin said the White House is focused on a stimulus that would include sending checks to Americans within the next two weeks.

But more economists now expect the US to slip into a recession that will include a sharp slowdown in the 2nd quarter.

“The impact of social distancing on consumer spending activity and a knockdown effect on business investment, together with the oil price hit on capital investments in energy infrastructure and expanded travel bans, likely means a -1.0% reading in the 1st quarter and a large contraction of 6% for GDP (gross domestic product) growth in the second, signaling recession for the US,” said Beth Ann Bovino, US chief economist at S&P Global.

The Italian government moved to renationalize the bankrupt former national carrier Alitalia under an emergency economic rescue package, and France signaled it would not hesitate to nationalize firms to protect them from collapsing.

In a move meant to help tame the massive volatility in the markets caused by the coronavirus outbreak, the French bourse regulator on Tuesday banned short-selling in 92 top stocks for the day.

The Philippines became the first country to shut down its stock market as the country goes into lockdown, and the bourse will be closed until further notice.