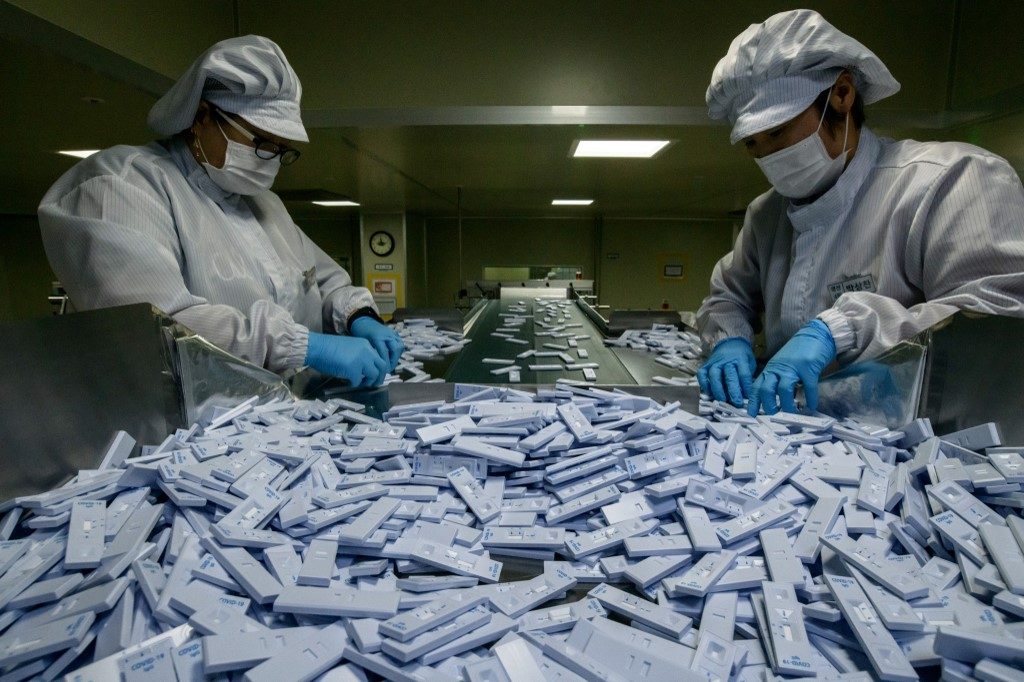 CHEONGJU, South Korea – Every few seconds, a batch of white plastic cases shoots along a conveyor belt in a South Korean factory – coronavirus test kits destined for export around the world as the global pandemic sends demand soaring.

SD Biosensor is 1 of 5 South Korean companies whose COVID-19 diagnostic tests are being used in the country, where a huge “trace, test, and treat” effort appears to have brought the epidemic under control.

The factory on a nondescript industrial estate in Cheongju, south of Seoul, is ramping up production of kits that could be crucial to the world’s anti-virus efforts.

And managers plan to start 24-hour operations next month, taking daily output to more than a million.

“I have been in the diagnostic industry for 35 years and never I have felt such a strong spotlight on our work,” he added.

The company is already exporting to 8 countries including Germany, Iran, India, and Italy, and is in discussions with around 60 more, led by the United States – which has now confirmed more cases than anywhere else in the world.

Controversy has swirled around the Trump administration’s response to the outbreak, with accusations of insufficient preparations, and South Korean President Moon Jae-in said this week that his US counterpart had asked for test kits, although the White House has not confirmed the request.

Park anticipates Washington’s Food and Drug Administration will grant his firm an emergency use authorization next week, and expects the US will become its “biggest export market.”

More than 100 workers in white protective suits staff the production lines, where machines pump out the tests at the rate of 2.5 per second.

SD Biosensor began developing its tests in January, soon after the virus first emerged in the Chinese city of Wuhan.

The South Korean government issued an emergency authorization for their use in just two weeks, expediting a clinical trial process that usually takes a year to complete.

That speed was a key factor in the South’s rapid scaling-up of its testing program – a result of its painful experience in dealing with the 2015 Middle East Respiratory Syndrome outbreak, when 38 people died.

Seoul was prioritizing the US, United Arab Emirates, and Indonesia, he said.

“The country on which we put the foremost priority is the US,” the official added, “as there has been a spike in new infections there, and President Donald Trump has also made a request to us himself, while the US has not barred the entry of our citizens and struck a currency swap deal with South Korea.” – Rappler.com