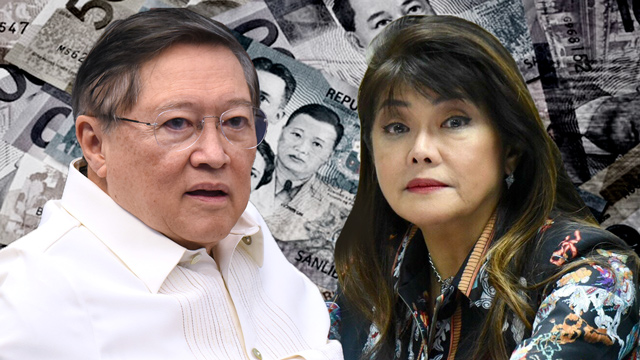 “Debt moratorium has not crossed our mind. It was never entertained or will ever be a part of our crisis response measures,” Dominguez said in a strongly-worded statement on Tuesday, April 14.

Marcos proposed on Monday, April 13, that the budget for interest payments amounting to P451 billion be used instead for cash aid for poor Filipinos affected by the lockdown.

Marcos added that off-budget payments of P582 billion to amortize the principal amount can also be reserved for cash aid.

Marcos explained that a debt moratorium is in line with the World Economic Forum’s call for international cooperation in handling the fallout from the COVID-19 crisis.

The senator’s father, late dictator Ferdinand Marcos, crippled the country with debt due to rampant corruption during his term from 1965 to 1986. Filipinos are still paying for the billions the Marcoses pocketed during his regime. (READ: Were it not for Marcos, Filipinos today would have been richer)

“Integral to our country’s remarkable turnaround story is how credible and responsible a borrower it has become since 1986. Back then, our total debt-to-GDP (gross domestic product) ratio hit as high as 78.3%. By 1991, this ratio had gone down to 65.2%,” Dominguez said.

The Philippines’ debt-to-GDP ratio in 2019 stood at 41.5%, brought down by fiscal moves across administrations after Marcos. Dominguez was natural resources minister under the Corazon Aquino administration, which succeeded the Marcos regime.

Dominguez said the country “cannot wish away our obligations at this critical time when the reliability of our word secures our economy’s capacity to bounce back once the COVID-19 pandemic is over.”

“Rather than take an option that will tank our long-term investment and borrowing prospects, we should burnish our reputation as a borrower and a business partner with integrity and palabra de honor (word of honor) because this ultimately benefits the Filipino people,” he said.

In a statement on Wednesday, April 15, Marcos asked the finance chief “not to take things personally.”

“COVID-19 is the enemy, not me. I plead Secretary Dominguez not to take things personally when I stand my ground that the government should suspend payment of the country’s debts to fund more urgent cash aid for millions of Filipinos who will surely go hungry if the pandemic lasts longer than expected and keeps them in lockdown,” Marcos said.

The senator added that the DOF should be “all out, all heart” in responding to the crisis.

“President Duterte has emphasized that government resources are not inexhaustible. A debt moratorium can substantially stretch the lifeline of resources that must reach as many people [who] cry out for help, as far as the remotest barangay infected by the virus, and hopefully as long as this crisis will last,” she said.

The Philippines has an automatic appropriations law, signed by former president Marcos, that compels the government to set aside a substantial portion of the annual budget to pay debt obligations.

Several legislators have attempted to scrap it and conduct an exhaustive debt audit to check for unjust terms, but such moves have failed.

While the government is fueling the virus battle with loans, a progressive group said there is no need to borrow from multilateral lenders. (READ: Philippines ready to increase debt levels vs coronavirus)

Youth group Samahan ng Progresibong Kabataan (Spark) also demanded the cancellation of all scheduled debt payments for 2020 in light of the “extraordinary circumstances” brought about by the coronavirus outbreak.

“The Duterte administration can and should have restrained from foreign loans at this crucial period that the national economy is heading for a nosedive and the prospects of rising up in the near future are dim,” said Spark spokesperson John Lazaro.

Spark said it has studies to show that funds meant for debt payments in 2020 are sufficient enough to cover the budget required for the national government to fight the pandemic and provide for millions who have suffered income loss. (READ: [ANALYSIS] How the Marcos-World Bank partnership brought PH economy to its knees)

“It is reasonable enough to defer payment instead of acquiring more loans from financial institutions with a long track record of predatory lending policies. All it takes is for the Palace to garner the political will,” Lazaro said. – Rappler.com