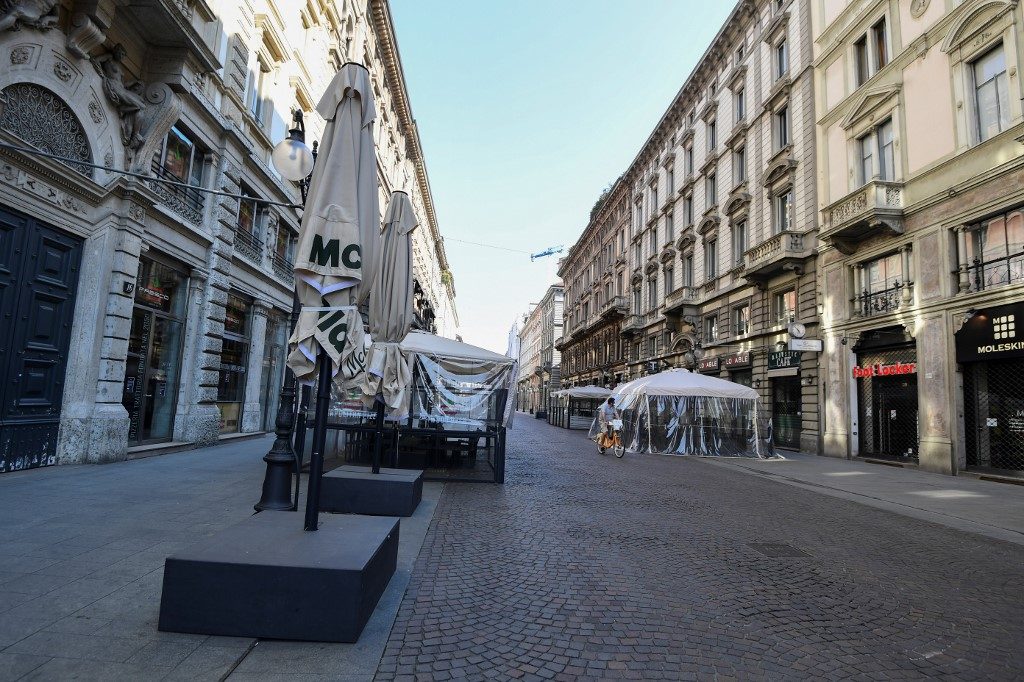 ROME, Italy – The head of Milan’s economically vital Lombardy region began waging a lonely campaign on Thursday, April 16, to get Italy to reopen for business and follow the lead of some smaller European states.

Attilio Fontana’s messages on Facebook created a political firestorm in a country still coming to terms with a virus that has killed 22,170 and brought the economy to its knees.

Italy’s official toll – believed to be substantially underreported – was the world’s highest until the United States overtook it last weekend.

The economic toll is growing fast as well.

The International Monetary Fund expects Italy’s total output to shrink by 9.1% this year – the worst peacetime decline in nearly a century.

Millions of Italians are either furloughed or suddenly unemployed.

“We are not courting controversy,” Fontana said in a second post, responding to criticism of his first message.

“But let’s look at the substance: many other European countries are already beginning to reopen. We need to immediately start thinking about our future.”

While Denmark has started reopening schools for younger children and Finland lifted a blockade of Helsinki, Switzerland unveiled a plan on Thursday to open some shops and services on April 27.

But most big European nations are extending the closures for at least a few more weeks.

The vibrant Lombardy region had been punching above its weight until the pandemic hit.

It makes up over a fifth of the Mediterranean country’s economy and is home to the Italian headquarters of numerous global firms.

But it also recorded more than half of Italy’s confirmed COVID-19 deaths.

Italian officials still largely follow the advice of doctors who think it is best to keep the nation locked until new infections sharply drop off.

Prime Minister Giuseppe Conte has been widely applauded for his handling of what is widely viewed as Italy’s worst crisis since World War II.

His popularity rose and Italy’s endless political battles appeared to abate as the nation rallied around the single cause of fighting the disease.

But Conte acknowledged that his decision last Friday, April 10, to extend Italy’s monthlong shutdown for another 3 weeks was not popular.

“It is a difficult but necessary decision for which I assume full political responsibility,” Conte told the nation.

Conte is still being backed up by a team of leading doctors who will play a big role in deciding how and when Italy dares to resume something resembling its old way of life.

“To me, it seems highly unlikely that Lombardy can reopen,” Paolo Vineis told La Stampa newspaper.

“Not unless we succeed in implementing a Marshall Plan for public health and exponentially increase testing.”

Fontana admitted that was not yet possible.

However, Lombardy sent a text message on Thursday encouraging all residents to download an app that can apparently help to monitor the spread of COVID-19. – Rappler.com