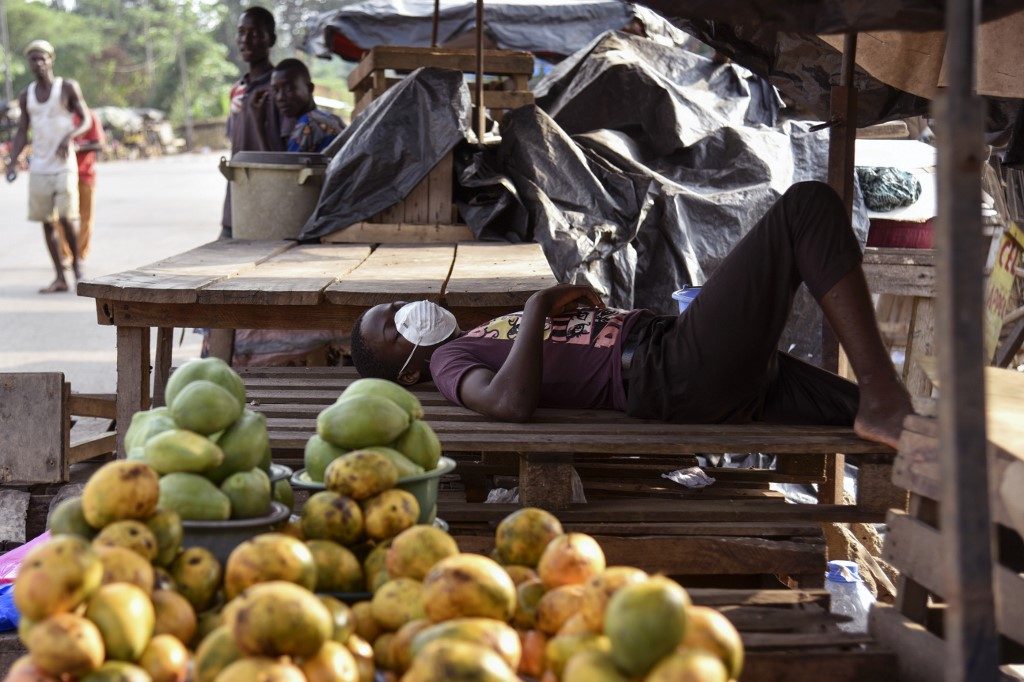 Facebook Twitter Copy URL
Copied
The debt moratorium 'will stop African economies from falling off the cliff in the immediate future, but if solutions aren't forthcoming, catastrophe lies ahead'

The agreement on debt, announced by the Group of 20 wealthier nations, is a one-year freeze on payment of debt owed by 76 poor nations, 40 of which are in Africa.

Africa’s overall debt stands at around $365 billion (336 billion euros), around a third of which is owed to China.

The world’s weakest economies will be able to free up precious cash for immediate needs but will still struggle under a mountain of debt, experts say.

“There will be a lot of spending ahead in fighting the coronavirus pandemic,” he said. “The fact that there is a moratorium helps these states to mobilize funds that they otherwise would have had to earmark for repaying debt.”

The moratorium “will stop African economies from falling off the cliff in the immediate future, but if solutions aren’t forthcoming, catastrophe lies ahead,” said Jean Alabro, an Ivory Coast economist.

In terms of infections, Africa so far has been relatively unscathed by the pandemic when compared to Europe or the United States.

As of Thursday, April 16, the continent – North African countries included – had recorded under 18,000 cases, and fewer than a thousand of these had been fatal, according to an Agence France-Presse tally.

The bad news is that Africa is highly vulnerable to the new virus.

As a result, anti-virus lockdowns, curfews, and other restrictions, when coupled with a slump in world demand for minerals and tourism, are set to have a crippling impact on African economies.

The International Monetary Fund expects Africa’s gross domestic product to shrink by 1.6% in 2020 – the “worst result ever recorded” – while the World Bank has warned that the region could slip into its first recession in 25 years.

The debt agreement should free up around $20 billion that can be used to fight the coronavirus pandemic, according to Saudi Finance Minister Mohammed Al-Jadaan.

Commentators pointed to the fact that the debt will remain on the books – and the payment freeze only applies to government-to-government debt, not on liabilities to private lenders.

“Suspending [debt] is not the same as canceling it” on the scale of assistance, said Djidenou Kpoton, an economic analyst in Benin.

“International demand [for these] is going to collapse, and prices will follow suit,” he said.

“The G20’s decision is ridiculous – it doesn’t rise to the challenge. It’s an insult to poor countries.”

Congolese economist Noel Magloire Ndoba, like others, said a one-year holiday on debt payment was “cosmetic. The real problem is the debt itself – it should be scrapped, quite simply.”

But some voices also warned of Africa’s chronic dilemma: when debts are wiped out, countries that struggle with graft or incompetent government typically sign up for more.

“So long as we have leaders who mistake the country’s bank account for their own, the number of debt moratoria or debt cancellations will have little effect – it won’t change anything,” said Masra Succes, a Chadian opposition figure who heads a pro-reform group, the Transformers’ Party.

The issue of governance also leads to the longer-term question of how to restructure African economies so that they are less exposed to the volatility of world markets and are better geared to weather crises.

“These days, African finance ministers are considered capable if they are able to borrow money,” said Alabro.

“They should focus more on local companies rather than on multinationals to spur local production and create jobs. African leaders have to build economies that are orientated towards the public interest.” – Rappler.com