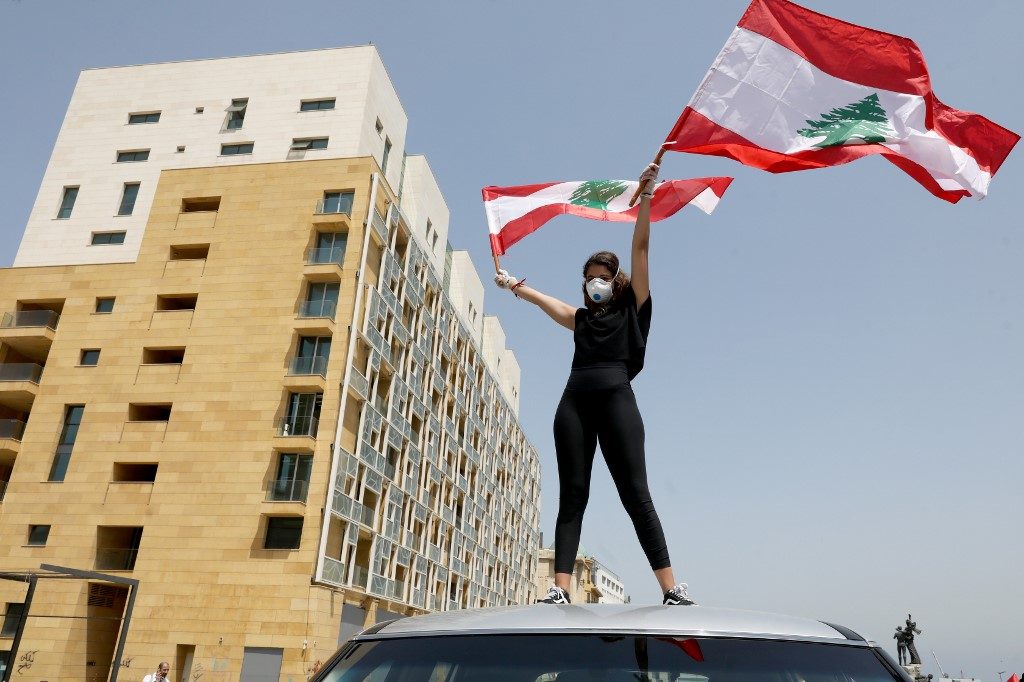 Facebook Twitter Copy URL
Copied
The Lebanese government approves a plan to provide support to 'needy sectors' during the coronavirus crisis, and also aims to get aid from the International Monetary Fund

A lockdown to fight the coronavirus pandemic has added to the heavily indebted country’s economic woes, which include soaring inflation, a liquidity crunch, a plummeting currency, and the country’s first ever sovereign debt default.

Demonstrators in northern Lebanon have attacked banks and clashed with security forces for 3 consecutive nights, reenergizing a protest movement launched in October against a political class deemed inept and corrupt.

“We will go to the IMF to request a program,” Diab said in a live TV address on Thursday, shortly after the government approved an economic rescue plan.

Diab said Lebanon will seek more than $10 billion dollars in financial support, without specifying how much would come from the IMF.

That comes on top of $11 billion in grants and loans already pledged by international donors in 2018.

The aim, Diab said, would be to reduce Lebanon’s enormous public debt burden from 170% of gross domestic product to less than 100%.

He added that the country’s economic reform plan, unanimously approved on Thursday during a Cabinet meeting, should see positive economic growth restored from 2022.

The plan will provide “direct and indirect support to needy sectors” and social programs, he said, but warned that “the road ahead will not be easy.”

“It is the first time the government approves an economic-financial plan after the country was almost driven to ruin because of the lack of planning,” he said in comments carried by the official National News Agency.

International donors have said reforms are necessary for Lebanon to unlock financial assistance.

Reform is also seen as a prerequisite for negotiations with creditors to restructure Lebanon’s debt pile after the government in March defaulted on sovereign bonds for the first time.

Experts had lobbied in favor of an IMF bailout, which they say is the country’s only escape route from its current slump.

But some officials had remained wary of the multilateral lender.

After the Cabinet meeting, information minister Manal Abdel Samad said the “main purpose of the plan is to start negotiations with creditors abroad.”

The information minister dismissed reports that the government would remove the decades-old peg of the Lebanese pound against the dollar, even as the currency has tumbled on the black market.

The currency hit a record low beyond 4,000 to the dollar on the black market this week.

Thursday’s announcement followed another night of violence in the north of the country.

The army clashed again with protesters angered by soaring inflation and other economic woes.

The violence left 42 people wounded, including 19 soldiers, according to the NNA.

“My salary is barely enough for me and my small family,” said Alaa Khodr, a 34-year-old protester from Tripoli, who fears he may lose his job at a non-governmental organization “at any moment.”

On Monday, April 27, a man was killed after being struck by a bullet fired by a soldier in clashes in Tripoli.

In the southern port city of Sidon, demonstrators threw Molotov cocktails at bank branches and offices of the central bank overnight.

Lebanon is grappling with its worst economic turmoil since the 1975-1990 civil war, compounded by measures to tackle a novel coronavirus outbreak that has infected 721 people and killed 24.

The Mediterranean nation has been rocked by a series of political crises in recent years.

The demonstrations had largely petered out after a new Cabinet was tasked earlier this year with implementing urgent reforms to unlock billions in international aid.

But protesters have hit the streets again in recent days in defiance of the lockdown, railing against the slump in the pound and rocketing inflation.

According to official estimates, 45% of the population now live below the poverty line.

United Nations envoy to Lebanon Jan Kubis applauded the government on Thursday for approving the plan, calling it “an important step towards reforms and dealing with the existential crisis.” – Rappler.com