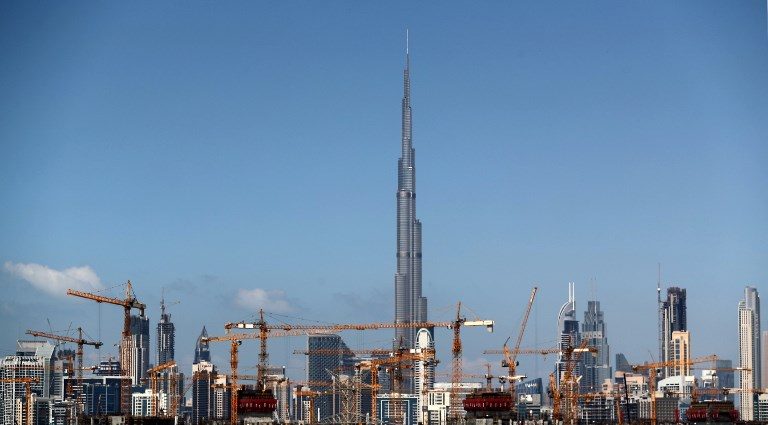 Facebook Twitter Copy URL
Copied
While some lockdown measures are lifted and many businesses are reopening, uncertainty remains for both employers and employees in Dubai

DUBAI, United Arab Emirates – In Dubai’s ritzy Marina district, white yachts are tethered to docks, standing idle – like many companies behind a luxury lifestyle industry battered by the coronavirus crisis.

The boardwalks that snake around the precinct’s artificial bays and canals, once packed with tourists, mostly from China, Russia, and Britain, are now deserted.

“Nearly 95%, if not 100%, of turnover has been lost,” the manager of a yacht charter company told Agence France-Presse (AFP).

When the United Arab Emirates halted all commercial flights and enforced a strict curfew to stem the spread of the disease, fishing trips and sightseeing excursions dried up “without warning,” the young Frenchman said.

Dubai, one of the 7 emirates that make up the UAE, lacks the oil wealth of its neighbors.

But it has the most diversified economy in the Gulf, building a reputation as a financial, commercial, and tourism hub that draws some 16 million visitors a year.

The cosmopolitan city state’s services sector is fueled by hundreds of thousands of foreigners, ranging from the super-rich to low-income migrant workers behind the scenes of the highlife.

Together, they have helped create and operate a city packed with gleaming office districts as well as megamalls, luxury resorts, and tourist attractions such as an indoor ski slope and a bar on the 124th floor of the world’s tallest tower, Burj Khalifa.

While the UAE has so far recorded more than 15,000 coronavirus infections and 146 deaths, some lockdown measures have been lifted and many businesses have reopened.

However, for both employers and employees, uncertainty remains.

The yacht manager said his firm is now allowed to restart limited services but there was “very little demand.”

Many residents are too nervous to emerge from their homes, he said, and it is the Muslim fasting month of Ramadan when daily life tends to slow down.

“At this rate, we can hold out until the end of the year or beginning of January,” he told AFP.

The Frenchman, who asked not to be named, said the company has lost up to $80,000 since the crisis erupted.

Employees had received 50% of their salaries in March and were asked to take unpaid leave last month.

Capital Economics said that with high debt, a struggling real estate sector, rising competition from neighbors, and an economy already in difficulties, Dubai is particularly exposed to the fallout from the pandemic.

“Governments around the world, including Dubai’s, have imposed draconian social distancing measures and travel restrictions to curb the spread of the coronavirus,” it said.

“Dubai is the most vulnerable of the economies in the Middle East and North Africa to the economic damage from such measures.”

The research firm’s economist, James Swanston, said that while the whole services sector, which makes up about 80% of Dubai’s economy, will be hit, tourism, wholesale, and retail trade will be worst affected.

“We estimated that if measures of social distancing and travel restrictions are in place for 3 to 4 months that this would knock around 5% to 6% off GDP (gross domestic product) at least this year,” he told AFP.

The UAE has announced a $70-billion stimulus package and other measures to support the economy, including tax relief and exemption from fees, while allowing businesses to lay off foreign employees, reduce wages, or impose unpaid leave.

Among those at risk is Lila, a Nepalese employee of one of the multitude of cleaning services companies that drop off uniformed women to homes and businesses across Dubai in minibuses.

The 23-year-old arrived in Dubai just before the pandemic broke out, recruited – at a fee – by a company that provides cleaners to people’s homes with the click of an app.

Already some of Lila’s colleagues have been fired and are waiting to go back to their home countries, mostly in Asia.

“They will not dismiss me because I’m new,” she told AFP, explaining that she needs to repay money she owes the agency, which will take time on her modest wage of 1,500 dirhams (380 euros) a month.

Vani Saraswathi, associate editor at Migrant-Rights.org, said that in the UAE, like most Gulf countries, struggling businesses pass on the liability first and foremost to lower income workers.

“What measures will these states put in place to prevent further distressing workers?” she asked. – Rappler.com