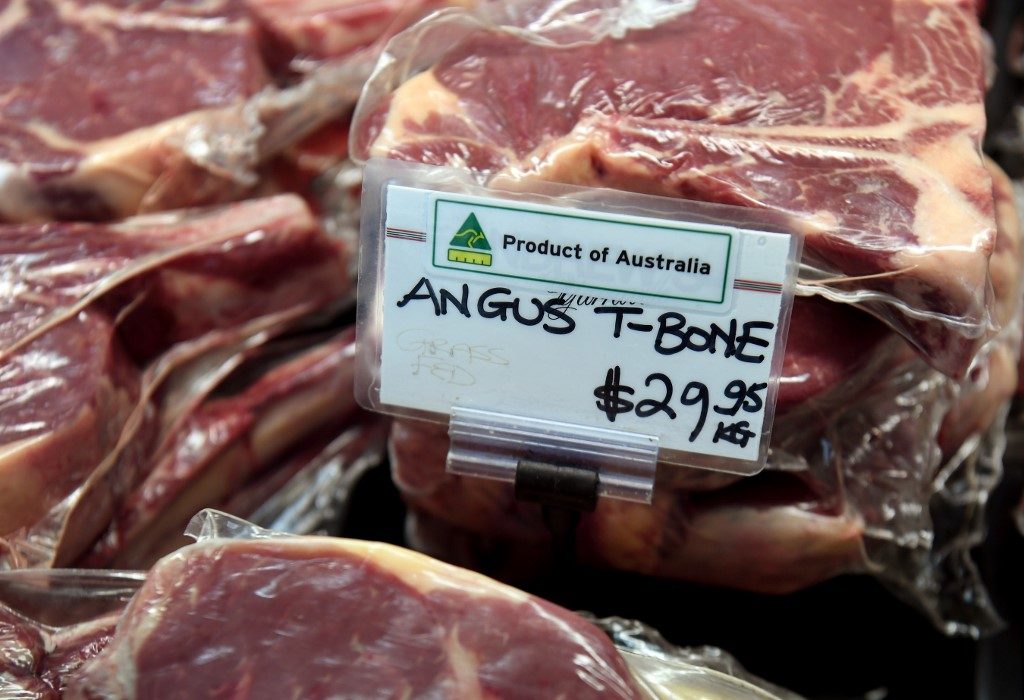 SYDNEY, Australia (UPDATED) – China suspended imports from 4 major Australian beef suppliers on Tuesday, May 12, just weeks after Beijing’s ambassador warned of a consumer boycott in retaliation for Canberra’s push to probe the origins of the coronavirus.

Analysts said the move raised concerns of a possible standoff between Australia and its most important trading partner that could spill over into other crucial sectors as it struggles to navigate the disease-induced economic crisis.

“We are concerned that the suspensions appear to be based on highly technical issues, which in some cases date back more than a year,” he added.

“We will work with industry and authorities in both Australia and China to seek to find a solution that allows these businesses to resume their normal operations as soon as possible.”

The 4 abattoirs account for around 35% of Australia’s beef exports to China in a trade worth about Aus$1.7 billion (US$1.1 billion), according to national broadcaster ABC.

Chinese foreign ministry spokesman Zhao Lijian told reporters in Beijing that the suspension was due to violations of “inspection and quarantine requirements.”

Zhao also blasted Australia’s demand for a coronavirus inquiry as “erroneous words and deeds” and warned against “using the epidemic to engage in political manipulation.”

But he denied a link between the suspension and the inquiry, saying they are “two completely different things.”

Beijing has also flagged major tariffs on Australian barley over allegations it is dumping the grain in China – selling it for less than it costs to produce. The Australian Financial Review newspaper cited confidential documents as saying Beijing is considering duties of 73.6%.

Tensions between the two have increased since Australia started calling for an independent investigation into the origin of the coronavirus outbreak, which began in China before spreading around the world, killing more than 280,000, infecting millions, and shattering the global economy.

Fears for other sectors

The calls have drawn threats from Beijing, with ambassador Cheng Jingye telling the Australian Financial Review last month: “The Chinese public is frustrated, dismayed, and disappointed with what Australia is doing now.

“If the mood is going from bad to worse, people would think ‘why should we go to such a country that is not so friendly to China?’ The tourists may have second thoughts.”

He added: “It is up to the people to decide. Maybe the ordinary people will say ‘Why should we drink Australian wine? Eat Australian beef?'”

Cheng also threatened the flow of Chinese students to Australian universities, a key source of revenue that is already under threat from pandemic travel restrictions.

Speaking in Canberra, Birmingham said the government was treating the trade issues as unrelated to discussions around a virus probe.

“We certainly don’t see any relationship, and we would expect that no other counterpart country should see a relationship between those factors either.”

Shares in Australian Agriculture Company, one of the country’s largest beef exporters, fell 3.7%.

The two countries were already at loggerheads after Australia hit China with huge anti-dumping levies on several products including aluminium and steel.

Beijing has also been riled by a decision to ban controversial telecoms giant Huawei from building Australia’s 5G network, while Canberra has protested China’s arrest of Chinese-Australian writer Yang Jun on spying allegations.

There are fears of a further escalation of the standoff and its impact on their two-way trade, which is worth about Aus$235 billion.

“The risk is, of course, that this broadens out to more critical areas such as iron ore, coal, education, LNG, etcetera,” said AxiCorp’s Stephen Innes.

He added, “But if it stays at beef and barley, then economically, it shouldn’t matter much for Australia.” – Rappler.com