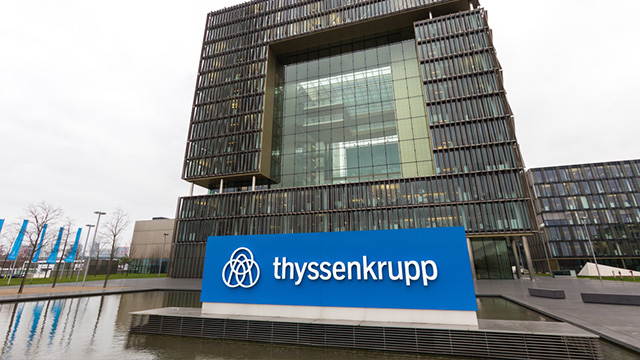 FRANKFURT AM MAIN, Germany – Struggling German conglomerate Thyssenkrupp has sunk deeper into the red, figures showed on Tuesday, May 12, as the coronavirus pandemic pummeled its industrial businesses.

The steel-to-submarines group reported a net loss of 948 million euros ($1.02 billion) in its 2nd quarter to March, compared with a 173-million-euro loss a year earlier.

The group said it was counting on a one-billion-euro credit line from Germany’s state-owned public investment bank KfW and other lenders to help it through the crisis, as the coronavirus chokes off economic activity around the globe.

“The full impact of the crisis on our businesses is not yet foreseeable. But it is already clear that the economic disruptions will leave very deep marks,” chief executive officer Martina Merz said in a statement.

The group’s car components division was especially badly hit, as efforts to contain the virus sapped demand in key market China and forced factories to shut down worldwide.

Plant closures and weaker demand also weighed on the group’s other units, from construction materials to steel-making.

The blow comes as the once mighty Thyssenkrupp struggles to overcome years of crisis.

The group has embarked on a painful restructuring and cost-cutting drive that will lead to several thousand job cuts by 2026, around 3,000 of them in its Steel Europe unit.

The group’s historic steel operations have long grappled with oversupply and fierce competition from China. But an effort to merge the Steel Europe unit with India’s Tata Steel was blocked by European competition authorities last year.

Thyssenkrupp now hopes to turn the corner by selling its highly profitable elevators division, seen as the company’s crown jewel, for 17.2 billion euros.

It plans to use the cash to shore up its other divisions, but Thyssenkrupp has already warned that the coronavirus fallout means the money will not go as far as previously thought.

“We will use the proceeds from the elevator transaction in the best possible way for the company. But it’s already clear now that the coronavirus will significantly reduce our leeway,” said Merz.

The elevator sale is expected to close by September, with the KfW credit line tiding the group over until then.

Thyssenkrupp is among a string of German companies to tap a massive government-backed rescue package designed to help Europe’s top economy weather the pandemic.

Given the economic uncertainty, Thyssenkrupp has withdrawn its full-year outlook.

But the group said its 3rd quarter to June results were likely to be even worse, warning that losses of “up to a good one billion euros cannot be ruled out.” – Rappler.com