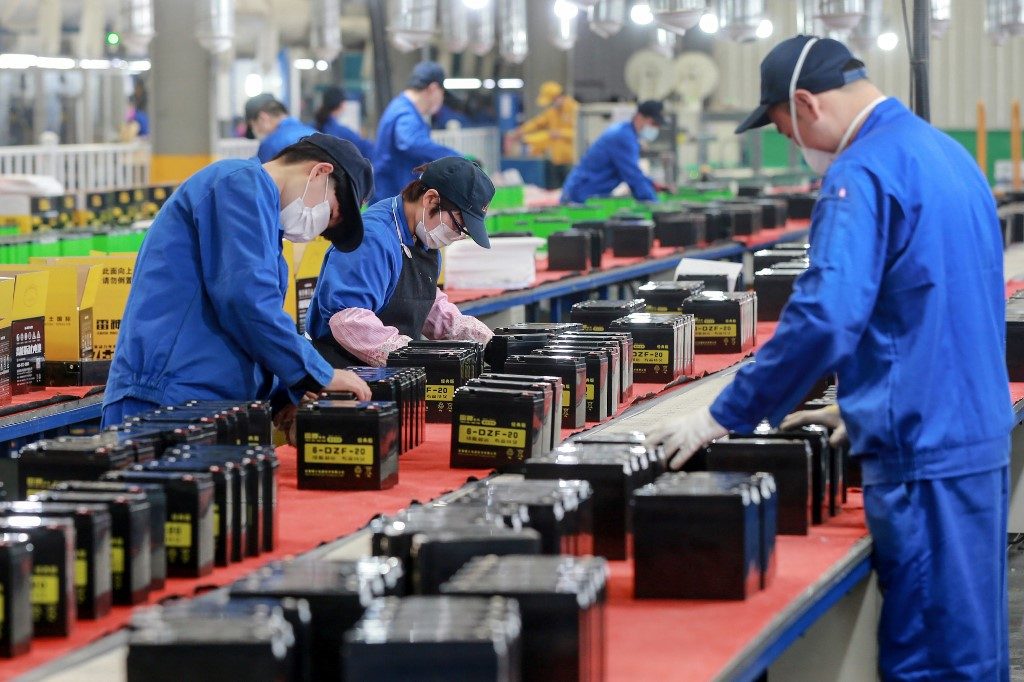 Facebook Twitter Copy URL
Copied
The 3.9% rise in industrial production in April 2020 is taken as a sign that China is bouncing back. Retail sales, however, drop 7.5%.

BEIJING, China – China’s industrial output returned to growth for the first time this year in April, official data showed Friday, May 15, but another sharp drop in retail sales indicated crucial consumer demand remains weak, which could scotch hopes for a quick economic recovery.

Analysts also voiced concerns over an uptick in urban unemployment, adding that the outlook remains unclear as key export markets struggle to reopen after weeks of lockdowns around the world.

The forecast-beating 3.9% rise in industrial production was taken as a sign that China – where the coronavirus first emerged – is bouncing back after weeks of shutdowns that helped shrink the world’s number two economy 6.8% in the 1st quarter.

The reading – which overshot the 1.5% estimate in a Bloomberg poll – came after a small downturn in March and 13.5% collapse in the first two months of the year, which marked the first contraction in 3 decades.

However, with the consumer playing an increasingly key role in the Chinese economy, news that retail sales dropped 7.5% highlighted the tough road ahead as people worry about returning to their normal habits even as infection and death rates remain low.

Still, the reading was much better than the near-16% drop in March but worse than expectations.

“The data is in line with the overall trend that supply is stronger than demand and the recovery is mainly driven by supply,” Larry Hu, at Macquarie Group, said. “Looking ahead, China’s economy will face strong headwinds in the next few months if demand remains weak.”

Also providing a headache for leaders ahead of the National People’s Congress annual legislative session next week is a 0.1 percentage point rise in unemployment to 6%.

The Communist Party has long staked its legitimacy on delivering jobs and prosperity in return for public acquiescence to its political monopoly.

She added that while the economy is gradually returning to normal, the spread of the pandemic abroad poses challenges to its “stability and recovery.”

Tommy Xie, head of Greater China Research at OCBC Bank, told Agence France-Presse the unemployment rate “may reflect the true picture of the Chinese economy,” adding that it is likely to rise further in May.

“In China, we didn’t see a similar scale of job losses as in the US…. We have a lot of guidance, asking companies not to cut jobs,” he said.

“That helps to stabilize the job market, but if the companies go bust eventually, such guidance is not going to help.”

Xie said there is a risk more firms could fail because of falling demand, adding “we are still not quite firm on how sustainable the recovery is.”

Analysts have warned stock markets, which have rallied since hitting deep troughs in mid-March, may have been overly optimistic about a swift China rebound, pointing to collapsing external demand and the threat of a second wave of infections.

Xie said the external demand shock, which may worsen if reopened countries suffer a second wave of infections, could cap the recovery in industrial production.

Next week’s National People’s Congress should give some visibility on policy specifics, but Nomura analysts said this week that a recent moderate rebound in locally transmitted Chinese cases remains a concern.

“Retail sales during this year’s Labor Day holiday were still down 6.7% from last year, and revenue for the catering and accommodation industries only recovered to around 70% of normal levels,” they said. – Rappler.com