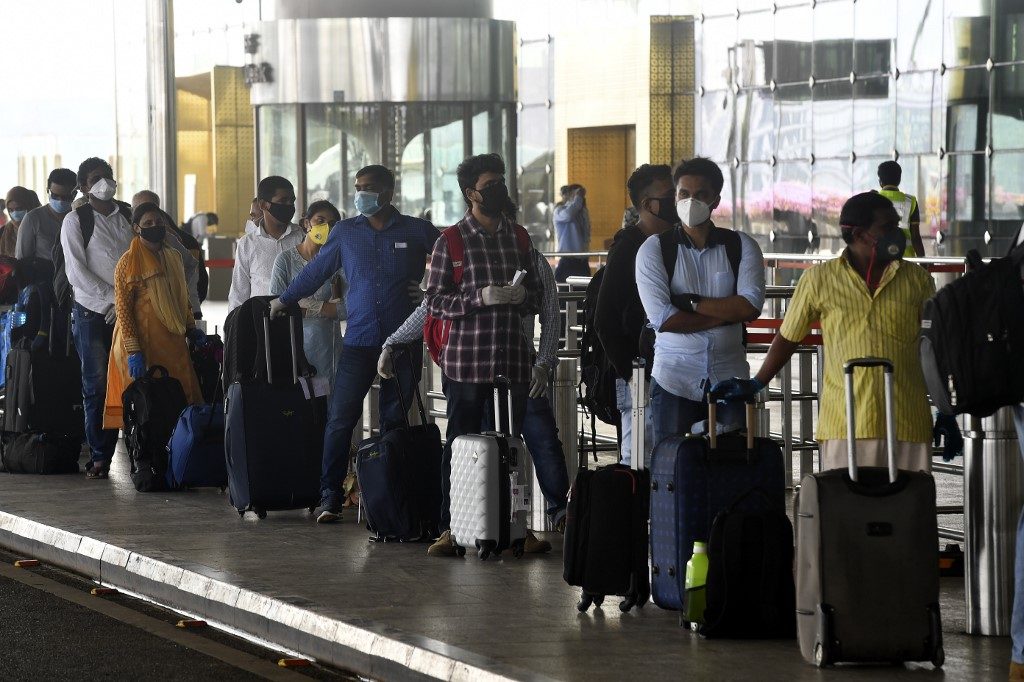 Facebook Twitter Copy URL
Copied
Airlines in India scrap dozens of flights and hundreds of passengers cancel their bookings on Monday, May 25, amid confusion over quarantine rules

NEW DELHI, India – Domestic flights resumed in India on Monday, May 25, even as coronavirus cases surge, while confusion about quarantine rules prompted jitters among passengers and the cancellation of dozens of planes.

India had halted all flights within the country, and departing and leaving for abroad, in late March as it sought to stop the spread of the coronavirus with the world’s largest lockdown.

But desperate to get Asia’s 3rd largest economy moving again, the government announced last week that around 1,050 daily flights – a third of the usual capacity – would resume on Monday.

Aviation Minister Hardeep Singh Puri said strict rules would include mandatory mask wearing and thermal screenings, although middle seats on the aircraft would not be kept empty.

The announcement reportedly caught airlines and state authorities off-guard, with several local governments announcing that passengers would have to go into quarantine for two weeks on arrival.

Maharashtra, the Indian state with the highest number of coronavirus cases, capped at 50 the number of departures and arrivals in and out of its capital Mumbai.

Airlines scrapped dozens of flights on Monday while hundreds of passengers canceled their bookings, reports said.

The NDTV news channel said 82 flights to and from New Delhi had been canceled and 9 at Bangalore airport.

Other flights from cities including infection hotspots Mumbai and Chennai were struck off, many at short notice, reports said.

At Mumbai airport social distancing was forgotten as irate passengers harangued staff after their flights were canceled at the last minute.

At New Delhi airport, hundreds of people anxious to get home but apprehensive about the risks queued from before dawn – all wearing masks and standing at least one meter (3 feet) apart.

Security personnel behind plastic screens verified check-in documents and that passengers had the government contact tracing app, Aarogya Setu, on their phones.

“While I’m looking forward [to flying home], the idea of flying is really scary,” student Gladia Laipubam told Agence France-Presse (AFP) as she stood in line.

“Anything can happen. It’s very risky. I don’t really know when I’ll be able to come back to Delhi now. There is no clarity from the university too at this time.”

One female airline employee wearing gloves, a mask, and a protective face shield said she and many other colleagues felt “very nervous” about starting work again.

“Dealing with so many people at this time is so risky. I must have interacted with at least 200 people since this morning,” she told AFP, not wishing to be named.

Cabin crew on the planes had to wear full protective suits with masks, plastic visors, and blue rubber gloves, and many were also confused about the rules, the Press Trust of India (PTI) reported.

“There is no clarity on whether I need to go into home quarantine for 14 days after returning to my base or show up for duty on Monday,” one pilot told PTI.

New coronavirus cases in India crossed 6,000 for the 3rd consecutive day on Sunday, May 24, surging to a record single-day spike of 6,767 infections.

Singh has said that international flights could resume in June, although dozens of special flights have in recent weeks brought back some of the hundreds of thousands of Indians stuck abroad. – Rappler.com