German gov’t to climb aboard at Lufthansa in virus rescue 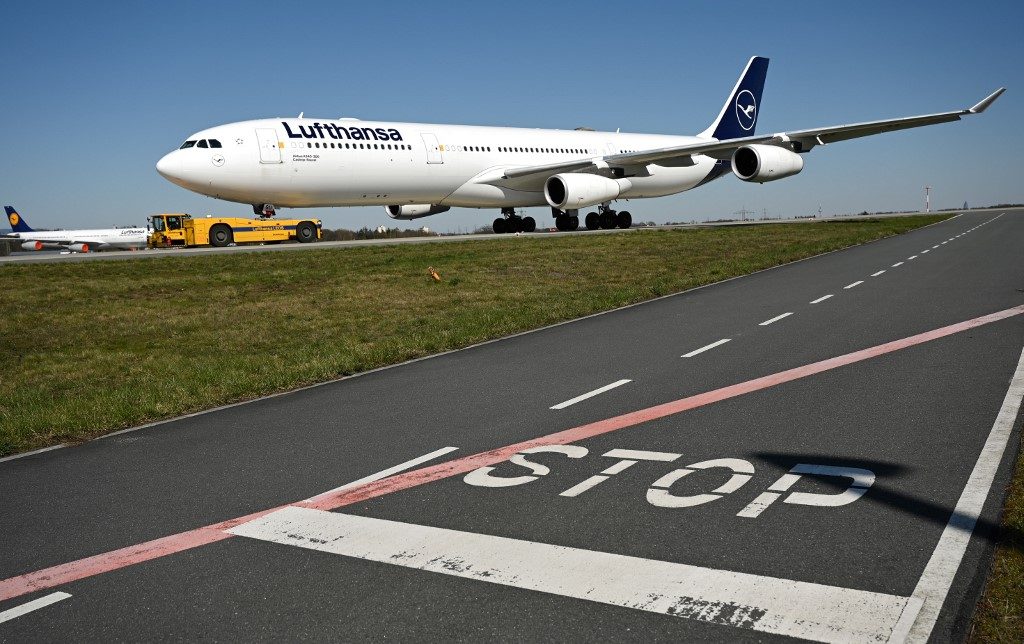 Facebook Twitter Copy URL
Copied
(UPDATED) To help Lufthansa, the German government offers a 3-billion-euro loan and 5.7 billion of 'silent' capital. It also seeks to buy 20% of the company for 300 million euros.

FRANKFURT AM MAIN, Germany (UPDATED) – Berlin will climb aboard airline giant Lufthansa as its largest shareholder in a 9-billion-euro ($9.8-billion) rescue if investors and competition authorities agree, as the coronavirus-stricken carrier faces an arduous years-long recovery from the pandemic.

Following the broad strokes of a scheme dangled last week, the economy ministry and Lufthansa said on Monday, May 25, the German government would offer a 3-billion-euro loan and 5.7 billion of “silent” capital, as well as buying 20% of the company for 300 million euros.

If Lufthansa faces a hostile takeover, “the economic stabilization fund (WSF) may also increase its stake to 25% plus one share,” the company said, which would offer Berlin a blocking minority.

The final deal reflects concerns within the group and among conservative members of Chancellor Angela Merkel’s coalition government about excessive, enduring government influence over the former flag carrier.

Berlin “is not bringing state influence into Lufthansa’s operational areas, quite the opposite. Lufthansa is a successful company and should be led by businesspeople in future as well,” Economy Minister Peter Altmaier told reporters in Berlin.

Lufthansa will commit to repay the state’s “silent” capital injection, plus interest, in exchange for the WSF selling its stake on the market by December 31, 2023.

If Lufthansa fails to pay interest on the state’s capital, Berlin would also be entitled to claim 5% of its shares.

The economy ministry said the deal included “far-reaching limits on pay for board members at the parent company and subsidiaries as well as for management,” while Lufthansa spoke of a possible “waiver of future dividend payments.”

The group had already suspended its dividend payout for 2019, saying that it needed cash on hand to weather the coronavirus storm.

And the state will also claim two seats on the supervisory board.

Required approvals from Lufthansa’s executive and supervisory boards are widely seen as a formality.

That leaves sign-offs from shareholders – who must agree to any plan that would dilute their investments – and competition regulator the European Commission as the two final hurdles for the rescue.

German business daily Handelsblatt reported on Monday that Chancellor Angela Merkel plans to resist potential tough conditions from Brussels, which could include Lufthansa giving up prized landing slots at its bases in Munich and Frankfurt.

Talks are “ongoing,” Altmaier said, adding that it is “essential for Lufthansa to continue its successful work at the same scale in Germany… that’s what we would like to achieve in Brussels in the coming days.”

In a statement, service workers’ union Verdi urged the commission not to impose conditions that “endanger not only Lufthansa’s competitiveness, but also the 140,00 employees’ jobs.”

Alongside Germany, Lufthansa’s subsidiaries Swiss and Brussels and Austrian Airlines have turned to their respective national capitals for aid.

The group headed into May with around 4 billion euros of liquidity on hand, but chief executive Carsten Spohr said it was hemorrhaging around one million euros per hour as 90% of its fleet has been grounded.

In the 1st quarter alone – when the full impact of the pandemic was yet to be felt – the group reported an operating loss of 1.2 billion euros, forecasting an even bleaker result in April-June.

No clear skies ahead

With an effective vaccine and any prospect of snuffing out the pandemic still many months – or even years – off, the airline industry faces a long, slow recovery filled with potential pitfalls.

Lufthansa boss Spohr has warned that the company likely now has 100 planes too many as a result, putting around 10,000 jobs in danger.

A far-reaching restructuring remains on the cards even after Lufthansa over the weekend confirmed reports that it plans to double its active fleet to around 160 aircraft in the coming weeks, adding some of Germans’ favorite Mediterranean holiday destinations back onto its much-reduced flight plan.

The majority of its roughly 760 planes will remain grounded as coronavirus restrictions are lifted only gradually. – Rappler.com