Floor trading resumes at NYSE, with masks and plexiglas 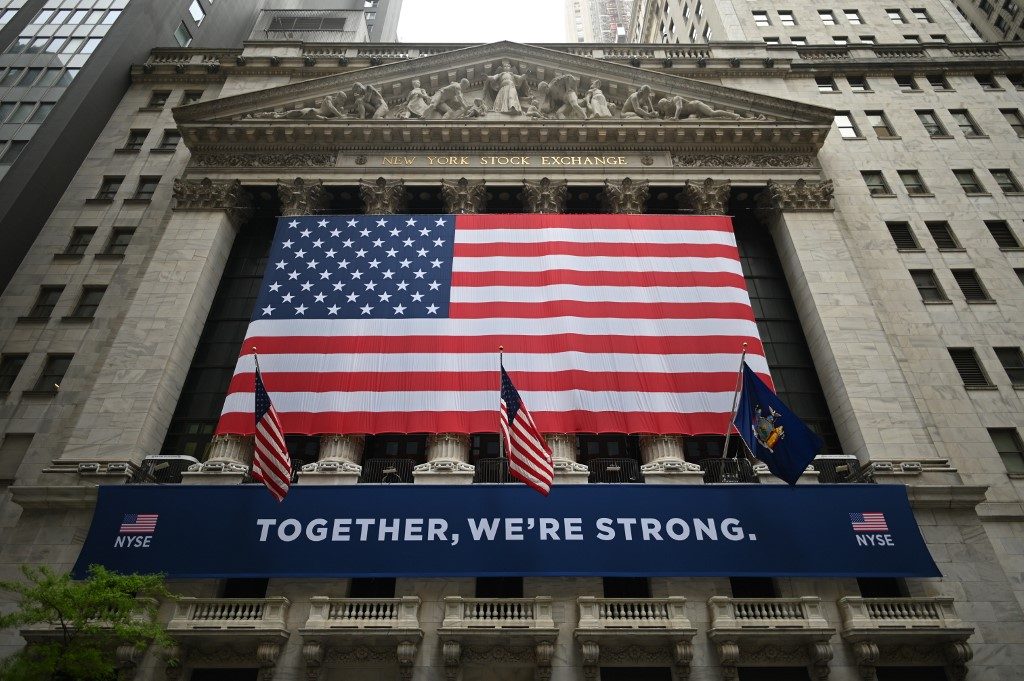 NEW YORK, USA – The New York Stock Exchange (NYSE), the symbolic heart of Wall Street, reopened its floor on Tuesday, May 26, after a two-month closure due to the coronavirus, with traders donning masks and separated by plexiglas.

Stocks surged following the trademark opening bell, which was presided over by New York Governor Andrew Cuomo and NYSE officials – all wearing masks.

While the NYSE is ramping only gradually, the moment was an important one symbolically for Wall Street and the United States as the country charts its recovery from the COVID-19 crisis.

“The really important thing is to get us down there, to get trading, to be there symbolically,” said longtime trader Peter Tuchman, 62, who stayed away as he is recovering from the coronavirus.

“We’re willing to step back into the floor and to be part of the reopening of the economy, and markets and the world,” he told Agence France-Presse.

Only about 80 traders, primarily from smaller companies, will be permitted for the first round of the NYSE relaunch.

NYSE market makers, who provide liquidity to other market participants, are still working from home until exchange officials open up more broadly.

All people on the floor must wear masks and have their temperature taken before they are allowed in. Traders will be separated by plexiglas and required to respect social distancing protocols.

The NYSE has also asked floor participants to not take the subway or other public transport to limit the risk of contamination.

“We are starting cautiously, with new safety measures to limit the strain on the healthcare system and the risk to those who work beneath our roof,” said NYSE President Stacey Cunningham.

Cunningham, in a recent Wall Street Journal op-ed, said the virus “will remain a stubborn reality,” but that she hoped the exchange could help “chart a path that other businesses in densely populated areas might follow.”

Cuomo praised the NYSE, saying it “reopened smarter than before: fewer people, wearing masks, new precautions that the Stock Exchange has incorporated, not because government said they had to, but because the stock exchange is smart.”

After emerging as the epicenter of the global coronavirus struggle in March, New York City has stabilized its case loads through strict social distancing and the shutdown of most non-essential business.

The financial industry is among the essential sectors. Cunningham has said the NYSE waited to resume floor trading until it could implement effective safety strategies.

The city still remains in a largely dormant stage through June, although some restrictions are expected to ease after that.

New York City Mayor Bill de Blasio said he was targeting the “first phase” of reopening for the first or second week of June provided better health trends hold. This would permit manufacturing, construction, and curbside pickup from non-essential retailers.

While many share transactions now are executed through computers – enabling the market to function even when physical trade was halted – NYSE leaders say physical trading facilitates orders particularly in the final moments of the day, or during first trades of a new company following an initial public offering (IPO).

The floor also has ceremonial benefit for companies to market IPOs and other corporate initiatives.

Investors greeted the NYSE’s reboot, lifting the Dow by about 530 points, or 2.2%, to 24,995.11, on optimism about coronavirus vaccines and the reopening of the economy.

President Donald Trump touted the latest surge as a sign the “Transition to Greatness has started,” he said on Twitter.

It was the latest example of Wall Street trading on hopes for the future and essentially shrugging off weak economic indicators, such as low consumer confidence.

Investors viewed pictures of mass gatherings over the Memorial Day Weekend “as more a sign of pent-up demand that is going to be good for the economy than a no-no in terms of public health risk,” said Briefing.com analyst Patrick O’Hare.

Tuchman said the NYSE’s move needed to be seen realistically.

“Let’s be clear that the pandemic is not over…. We are hoping that the market stays strong, that the economy catches up with the market, which has rallied in the face of economic disaster.” – Rappler.com