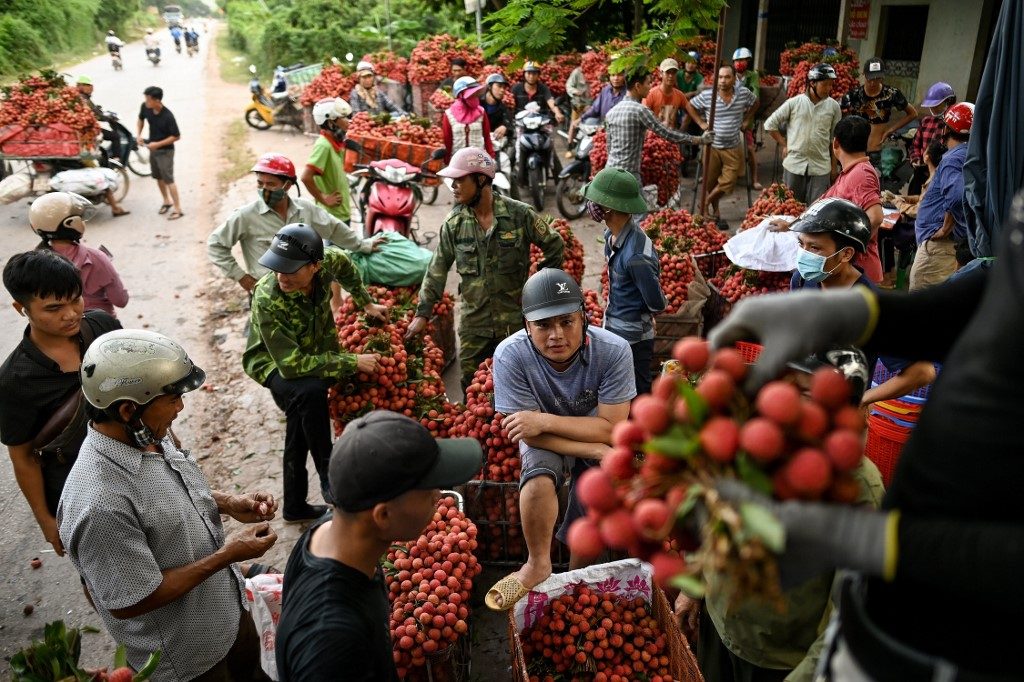 Facebook Twitter Copy URL
Copied
Vietnam usually exports more than $30 million worth of fresh lychees each season, but business is down as the coronavirus crisis triggers border closures

BAC GIANG, Vietnam – Hundreds of lychee farmers sorted and graded huge piles of the tropical fruit at a busy wholesale market in northern Vietnam on Tuesday, June 9, but many bemoaned slumping prices as foreign traders were held up in quarantine.

After mounting an aggressive response to the coronavirus pandemic, life in the country is back to relative normality and workers clustered together mask-free at dawn in Bac Giang province, their motorbikes fitted with baskets overflowing with the sweet fruit.

The communist nation usually exports around 100,000 tons of fresh lychees worth more than $30 million – mostly to China but to Japan, Australia, and the US too – each season.

But business is down this year as Vietnam keeps its borders shut.

“Because of the pandemic, we aren’t seeing Chinese traders and we mostly sell to domestic traders so the price is very low,” Nguyen Van Thanh, 35, told Agence France-Presse, adding that half his haul ends up overseas in a normal year.

Foreign buyers tend to come directly to the market – just a few hours drive from the Chinese border – during the fruit’s short 6-week season.

But state media reported last week several hundred from China and Japan had been quarantined for 14 days.

Despite authorities saying they would promote domestic consumption, prices have dropped to half of what they were last year.

“We have worked hard the whole year…but this is not enough to live on,” said farmer Do Van Toan, 47, who estimated he would earn not more than $4,000 this season.

Already a major coffee, rice, and catfish exporter, Vietnam has in recent years turned its attention to fruit.

Last year, it exported $3.76 billion worth of fruit and vegetables.

So far, Vietnam has officially recorded only 332 cases of the coronavirus, and no deaths.

Although some of its borders are open for goods, foreigners – save some specialists and highly-skilled workers – are not permitted to enter.

On Tuesday, Hanoi said it would look to resume flights with “safe zones” – places that had no new cases for 30 days. – Rappler.com