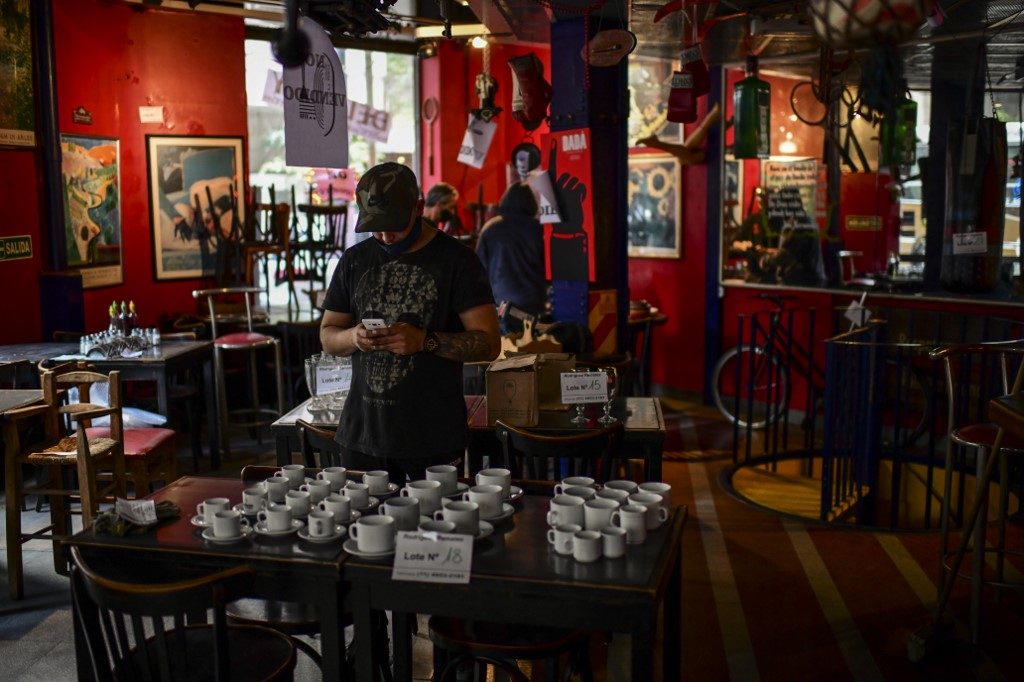 Facebook Twitter Copy URL
Copied
A survey by the Federation of Commerce and Industry of Buenos Aires shows at least 18% of the 110,000 businesses in the capital have shut down since the coronavirus began

BUENOS AIRES, Argentina – After stuttering through 2 years of recession and 3 months of grim coronavirus lockdown, many businesses in the Argentine capital Buenos Aires have had enough and are closing their doors.

“I made the decision to auction off the contents and with the capital that comes from the sale, pay the staff and get rid of the business,” Ricardo Klausner told Agence France-Presse at the door of his restaurant La Tekla.

“The quarantine gave me time to mourn and today I actually feel very relieved.”

Workers were taking out crates of glasses and crockery, chairs, and an industrial kneading machine from the restaurant Klausner operated for 26 years in downtown Buenos Aires, employing 7 people.

“We had one of the worst Christmases in history in terms of consumption. The summer was also very bad and then we started with the pandemic. Once the coronavirus ends, the crisis will continue.

“People cook at home, save, take care of their money, because they don’t know what the future holds for them,” Klausner said.

According to a survey by the Federation of Commerce and Industry of Buenos Aires, at least 18% of the 110,000 businesses in the capital have shut down since the coronavirus began.

Hotels, gyms, car wash services, and hairdressers have yet to be given permission to open up, and restaurants have only been authorized for deliveries, which has reduced their profits by 25%, according to FECOBA.

“By the time it is decided to resume activity, 25% to 35% of businesses will have disappeared, leaving a string of unemployed, having been made defunct by the state because it was impossible to pay taxes,” said Fabian Castillo, FECOBA’s president.

The streets around the Plaza Cortazar in the Palermo Viejo neighborhood in the heart of Buenos Aires look desolate these nights.

The trendy bars and restaurants that used to overflow with customers now have their blinds down and there is little traffic.

For Santiago Olivera, who owned the Bad Toro Bar for 9 years, it was impossible to go on.

“The costs of this place were very high and we are coming from two years of fairly bad consumption. Three months without making any money was the last straw.”

Olivera pointed out that because it was closed, he was only charged half the rent. “But we are still getting tax and service bills as if we were open. On top of that, a government decree prohibited us from reducing or suspending employees, which is why we find ourselves closed for 3 months and with a full complement of staff.”

Five other businesses in his street have decided against reopening, he said.

Argentina’s economy has been limping through recession since 2018, exacerbated this year by the effects of the coronavirus pandemic. Authorities estimate gross domestic product (GDP) will fall 6.5%.

The government is currently locked in complex negotiations on restructuring $66 billion of its debt, which soared to $324 billion overall last year – the equivalent of around 90% of its GDP. (READ: Coronavirus pandemic poses perfect storm scenario for Argentine debt)

Around 35% of its 44 million people live below the poverty line. – Rappler.com