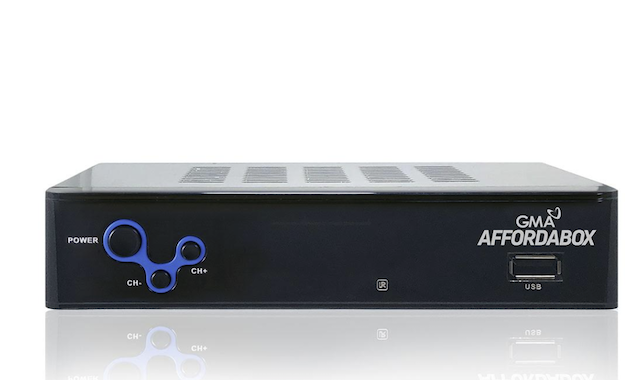 Called the GMA Affordabox, the plug-and-play device of the Kapuso network aims to deliver GMA 7 and GMA News TV in digital television format.

It will also feature the Heart of Asia channel, as well as other free-to-air digital TV channels.

The device will also allow viewers to record their favorite TV shows, either by instant or scheduled recording. It also has a USB port, which allows users to play video files, photos, and even listen to music using a flash drive.

GMA Affordabox will also have a nationwide Emergency Warning Broadcast System that will alert households in case of calamities. The alerts can be triggered by the government’s National Disaster Risk Reduction and Management Council.

The device is sold at P888, cheaper than ABS-CBN’s TV Plus, which is sold at around P1,499. (READ: FAST FACTS: Other businesses of ABS-CBN)

The launch coincides with the network’s 70th anniversary.

“In celebration of this milestone of reaching seven colorful decades in the industry, we are more than grateful for the Filipinos’ continued trust in GMA Network as we reaffirm our commitment to deliver excellence in news and entertainment,” said GMA Network chairman and chief executive officer Felipe Gozon.

The GMA Affordabox is directly competing with Kapamilya network’s ABS-CBN TV Plus, which was launched in 2015 and has sold almost 9 million units as of 2019.