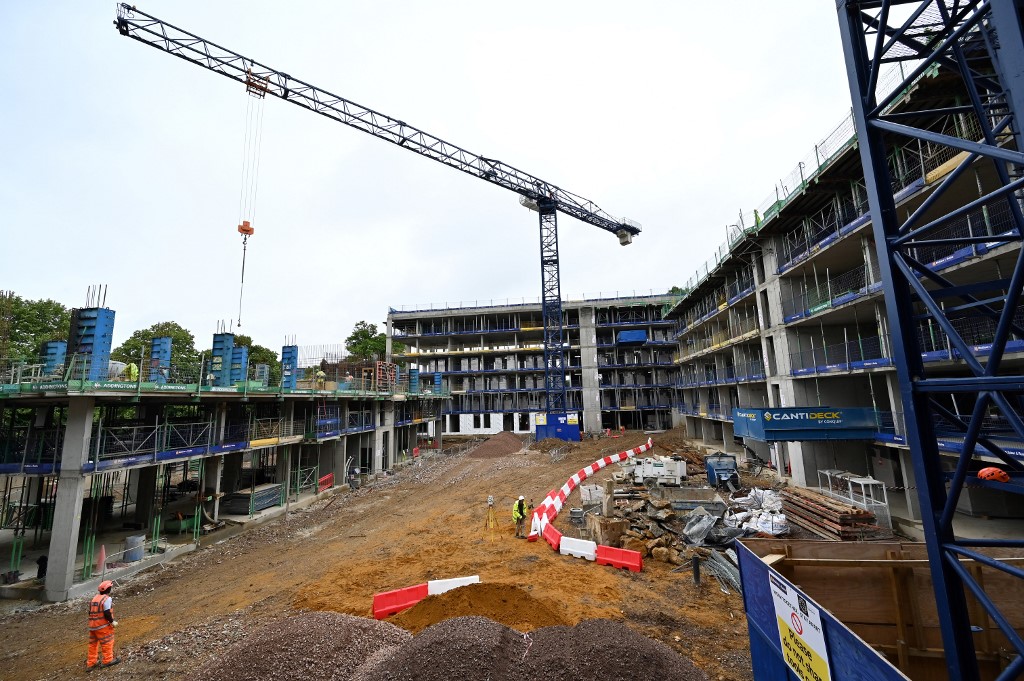 GUILDFORD, United Kingdom – Cranes whir above the affluent market town of Guildford, southwest of London, as Britain’s construction sector cranks back into gear after a damaging coronavirus lockdown.

Many of the nation’s builders downed tools when the government effectively shut the country down on March 23, ordering the public to stay at home as the outbreak took hold.

More than 3 months later, restrictions are gradually being lifted and activity is picking up speed.

When completed next year, the development will comprise 533 student rooms across 4 6-storey buildings.

Although the government allowed some sites to carry on through lockdown, Guilden Park stopped work to ensure its 75 workers could operate safely.

“There was so much focus on the new measures with COVID-19 that you could not take your eye off the ball,” said project manager Barry Kerr, 34.

“Everybody realized it was not just about health and safety – it was about their families,” he told Agence France-Presse at the facility.

Start times and breaks were staggered, a fingerprint entry scanner removed, and employees had to declare themselves healthy every day.

The contractor also created an “isolation room” in the event of infections, although no staff have yet had to use it.

Belfast-based McAleer & Rushe, which manages the site, and its subcontractors made use of the UK government’s jobs retention scheme during the lockdown.

The emergency program sees the state pay most of the wages of furloughed staff. But just 4 M&R employees were made temporarily redundant at the Guildford site.

“I believe the company made the right decision to…temporarily shut the sites until such time that we could ensure that we were being compliant with the guidance set out by both the government” and the National Health Service, said Kerr.

“At that time there were some contradictory messages being sent.”

Construction sites stayed open in England and Northern Ireland, while those in Scotland were shut.

The lockdown sparked a collapse in UK construction activity in April and May, before a rebound in June.

The purchasing managers’ index for the sector soared to 55.3 last month from just 28.9 in May, according to data compiler IHS Markit.  A figure below 50 indicates contraction, while anything above shows expansion.

“The effect the lockdown had on the actual construction sector was that it effectively closed at least 50% of the sites,” said Gareth Belsham, director of surveyors Naismiths.

“Construction came to an almighty grinding halt. There were only smaller developers, mainly residential developers, that carried on through the midst of that.

“But now construction itself is coming back on.”

Belsham stressed the construction sector was resilient through the crisis because many self-employed workers needed to earn cash regardless.

The lockdown came as the sector had only just overcome chronic economic turmoil linked to uncertainty over Britain’s departure from the European Union (EU).

Prime Minister Boris Johnson has called for Britain to “build, build, build” its way out of the virus-induced downturn with infrastructure investment.

“We’ve moved through the acute phase of the crisis where large swathes of the economy were closed. We’re now fortunately able to safely reopen parts of our economy,” said Johnson’s finance minister Rishi Sunak on Thursday, July 9.

“Overall at the moment, I think the prognosis for construction is very positive,” said Andrew Southern, founder of property developer Southern Grove – whose sister company Future Generation is bankrolling the Guildford project.

“I think we are going to come out of this stronger than ever. And I think Boris Johnson very much emphasized that in his statement around infrastructure, schools, roads, and railways, and I think it’s the right thing to do,” added Southern.

Belsham remains skeptical, though, about the delivery of state infrastructure projects – particularly as Brexit impacts upon the pool of foreign construction labor.

But he said Britain’s departure from the EU had dispelled long-running uncertainty that had hurt the industry. – Rappler.com