MANILA, Philippines – Diversified conglomerate San Miguel Corp. announced a 19% increase in net income from its January to March operations, largely due to healthy growth in the profit streams of its power units.

San Miguel, which still controls but is less focused on the brewery business, recorded a net income of P8.5 billion during the period against P7.1 billion the previous year.

These were how the operating profits of its units performed: 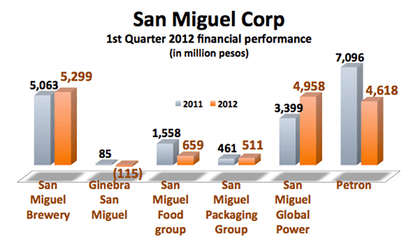 Since the start of 2012, the portfolio of San Miguel has changed. In entered into or has announced the following deals:

The company had broken ground for a new grains terminal it plans to put up in Mabini, Batangas and is currently in the preparatory stages of construction.

“We expect it to be operational by the third quarter of 2013. This terminal is designed to accommodate larger vessels which would reduce our freight costs,” SMPFC Chairman Eduardo M. Cojuangco Jr. said.

Meanwhile, a second nuggets line is being constructed to expand operations in its General Trias, Cavite plant due to increased market demand for nuggets and related products. The construction of the new line is already halfway done and it is expected to be operational by third quarter of 2012, he said.

The company also noted that it benefitted from synergies with Petron Corp. as its distribution network was augmented with the acquisition of Treats convenience stores. It also launched several new products under its value-added meats and dairy segments.

“We expect the rest of 2012 to be filled with challenges. Yet we remain confident and excited as we hurdle these. We will not lose sight of the big opportunities available to our company,” Cojuangco said. – Rappler.com