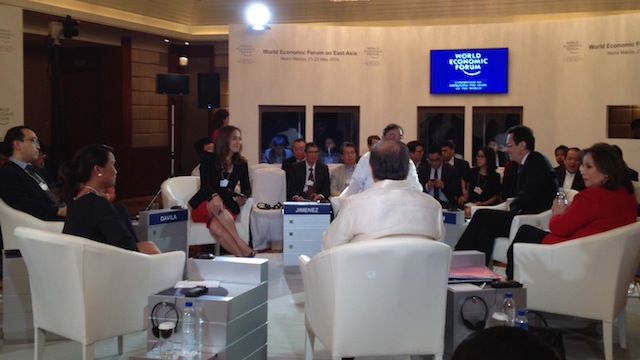 MANILA, Philippines – The Philippines expects to benefit from the upcoming ASEAN Economic Community, except for at least two sectors: agriculture and small and medium enterprise (SME).

Government, business and civil society leaders in the World Economic Forum on East Asia had mixed sentiment toward the region’s plan to integrate into a single market by 2015.

“The Philippines, in terms of agriculture, is not yet ready for ASEAN integration,” said Cherrie Atilano, co-founder and president of Gawad Kalinga Enchanted Farm, during the session, “Philippines: The Next Asian Miracle.”

ASEAN countries eye to become an integrated market like the European Union where a free flow of goods, services, capital and labor is seen. Crucial in making this happen is the streamlining of business procedures and lowering of tariffs, with the latter projected to boost supply of imported goods among member-countries.

Atilano said Filipino farmers would have a hard time competing against their counterparts in neighboring countries, where production costs are much lower. She said local rice prices, for example, are way higher than in neighbors such as Cambodia.

In the same session, businessman Manuel Pangilinan raised a similar concern. He talked about the sugar industry, which has been “flattish in terms of production.”

“We’re not competitive against Thailand, whose cost is lower because they have bigger mills and their farm yield is much bigger than us. Does that mean the Philippines should move out of the sugar business?”

“How does the industry respond to an open market where tariffs have dropped from around 18% to 4%. Do we now import sugar?”

“ASEAN integration is a concept, but it must translate into particulars. What does it really mean for us?”

In another session, “Connect on Trade: Lifting Barriers to Growth,” Trade Secretary Gregory Domingo said liberalization has made many Philippine sectors very competitive regionally, but “there is always concern, particularly for SMEs.”

He added that changes must be done in the rules of free trade agreements (FTAs) so benefits can be felt by small and medium enterprises.

“If I’m a small company wanting to export to neighbors, to avail of free trade, there’s voluminous work involved. The rules are really meant for big companies, not designed for small ones. We have to make changes so SMEs can participate and feel the impact of FTAs.”

Other speakers at the forums were bullish about the opportunities in integration.

Tourism Secretary Ramon Jimenez Jr. said an open skies policy in the region would boost tourism in the country. He said the Philippines has a strong advantage in terms of location.

“We’re right smack in the middle of [Asia].”

Jimenez said some sectors are expected to resist change, but they would find a way to compete. He cited budget airlines, for instance. “Now they’re buying new airplanes, launching new routes.”

Domingo said the country is banking on its talent pool and this is the reason why the government is investing in the “education and training of our people.”

“We’ve restructure primary and secondary education in the Philippines to bring it to international standards. We’re funding training programs for sectors, like the IT-BPO (business process outsourcing).”

All eyes are on the Philippines as it hosts for the first time the WEF on East Asia, where over 600 political and business heavyweights from all over the world gather to discuss key economic issues such as inclusive growth and the ASEAN integration. – Rappler.com

For live updates on the World Economic Forum on East Asia 2014, visit our live blog here.