Facebook Twitter Copy URL
Copied
The region must narrow the gap between rich and poor to make economic growth sustainable, says an expert at the World Economic Forum on East Asia

MANILA, Philippines – An International Monetary Fund (IMF) official urged the Philippines and the region to address the growing income gap between the rich and poor, saying this could make economic growth less sustainable.

“Income inequality is rising in most countries in Asia especially those with large populations,” said IMF Deputy Managing Director Naoyuki Shinohara during a session of the World Economic Forum on Friday, May 23.

“If you have high income inequality, you may enjoy high growth but only for a short time. It’s not sustainable,” he added.

Shinohara said one way to deal with this is to redistribute wealth through social mechanisms such as conditional cash transfer (CCT).

This is being done in the Philippines, where the rich-poor gap is also widening.

A report released by the government statistics agency last year showed that the high-income class enjoyed double-digit income growth compared to the single digits seen by the middle- and low-income groups, supporting perception that economic gains were not trickling down to the poor.

To alleviate poverty and inequality, the Philippines has a CCT program called Pantawid Pamilya, where over 4 million families get cash from the government in exchange for keeping their children in school and taking them to regular medical check-ups.

However, Shinohara advised governments to make sure mechanisms such as this do not harm the efficiency of the economy.

“Find a good balance between efficiency and the social value we have to protect.”

This is where fiscal policy plays an “important role,” he said.

Shinohara said governments must make sure tax revenues are more than enough to fund their social programs.

In developed countries, he shared “taxation and income transfer to social programs” have been proven to reduce income inequality by a third, though he was not sure if the impact was the same in developing countries.

In Asia, he said countries have to deal with low tax revenue ratios and huge amounts of tax exemptions.

The Philippines has been trying to shore up revenues by plugging the holes in the tax system; it is going after tax cheats and smugglers. It also revamped its tax collection agencies to reduce corruption.

Raising its collections helps it reduce its budget deficit, which in turn, lowers its borrowing expense and frees up funds for social initiatives.

The country’s governance efforts have been recognized by the international credit rating agencies. The Philippines won investment grade status for the first time last year.

Shinohara, meanwhile, pointed out that the tax structure of countries in Asia is somewhat regressive – it relies more on value-added tax (VAT) than income tax.

“Consumption tax is friendly to economic growth [but] I’d recommend that you rely more on income tax,” he said, noting that VAT hits the poor more than the rich.

Making the tax system progressive is also a way to redistribute wealth, he said. 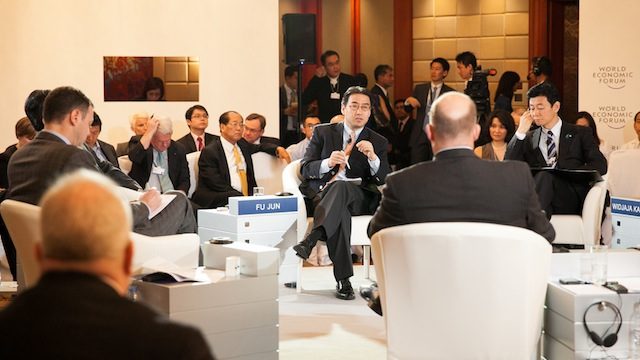 How income is distributed is one economic indicator not really measured by the gross domestic product (GDP), along with other social dimensions such as health and education, according to Shinohara and other speakers at the forum.

Therefore, they urge to go beyond GDP when aiming for sustainable growth.

“GDP is a very wonderful, delicate set of economic indicators, but it has limitations. It doesn’t measure household work that doesn’t go out of house, how income is distributed is not included… Environmental degradation and other externalities are not in the GDP,” Shinohara explained.

Fu Jun, professor at Peking University in China, said: “A change in mindset is important. Growth should not just be driven by efficiency. You should think about human development or wellness and social dimensions.”

Nandu Nandkishore of the Nestle group had the same view. “We need to move beyond GDP to other measures such as health, employment and millennium development goals.”

“Today we have a billion and a half people who are malnourished. This is a public health crisis, which is shameful. How we cope with health problems is a very important measure of inclusive growth,” he added. – Rappler.com