Hedging against acts of God 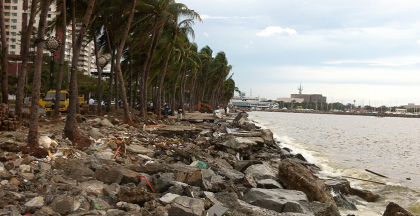 An act of God can be legally defined. It is an event outside of human control which no one can prevent, like the typhoon that floods a house, the bolt of lighting that strikes and the coconut that plunks down from a tree.

Hedging against the many acts of God may be becoming more popular.

“The calamities that beset the country in recent years have spread awareness among consumers about insurance policies with “acts of God” clauses and many more are purchasing these products,” said Melvin Esteban, a registered financial planner with 14 years of experience.

It may not be just the rising flood waters that are helping to sell insurance but the industry’s earned premium have increased between 2009, the year of Typhoon Ondoy, and 2010. The Insurance Commission reported in its website that the incremental premium paid amounted to a hefty P1.37 billion.

The Philippines is battered by natural disasters every year. Between 1949 and 2009 the National Statistical Coordination Board counted 1,202 tropical cyclones, equivalent to nearly 3 straight years with a tropical cyclone every day. Typhoons accounted for roughly half of those storms. Typhoons, in particular have been more devastating in the past years, reducing the traditional thinking among Filipino businessmen that the chance of being victimized is remote.

Before Ondoy, most of the sold non-life insurance policies covered only accidents or theft for vehicles or fire for homes.

“In the past, what people normally think is that when you say comprehensive, especially on motor policies, it is as comprehensive as can be. So they got the shock of their lives during Ondoy when they found out that ‘acts of God’ have to be purchased as an extension to their policies,” noted Ramon Zandueta, the CEO of insurance broker Marsh.

Zandueta said the large number of insurers drives competition up and prices down.

Cora Guidote, the senior vice president for Investor Relations of SM Investments Corporation, the holding company of Henry Sy’s SM Group, said their company has been protected by an ‘act of God’ policy since even before Typhoon Ondoy.

As an example, she said, the clause was what covered the refurbishment of SM City in Rosales, Pangasinan after it suffered from flooding in the 2009 typhoon. She added that any damage caused by Pedring or future typhoons would likewise be covered.

Sofitel Hotel, situated along Manila Bay, would not disclose which insurance policy it subscribes to. The five-star hotel had to close for nearly two weeks after Typhoon Pedring checked in.

Sofitel’s media representative reported that the hotel was at about 63% occupancy when Pedring hit and guests were forced to evacuate after flood water seeped into the lobby.

As some motorists discovered when their insurance claims were denied after Typhoon Ondoy, it may be better to hedge for an ‘act of God’ sooner rather than later.

“People are usually more focused on how they can grow their money than how to protect their assets,” said Esteban, “But in the blink of an eye everything can be lost.”