Ride Nyfti, the foldable bike proudly made in the Philippines 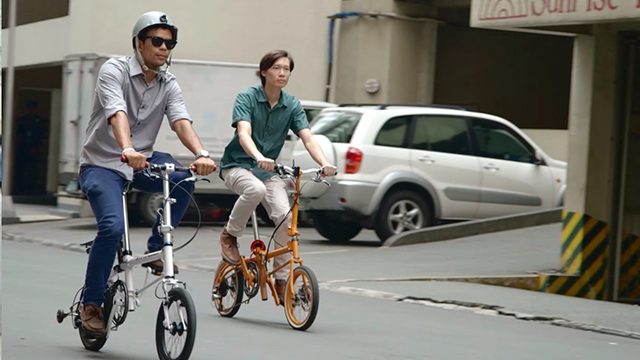 Entrepreneurs have a lightbulb moment when they discover a problem that they want to solve.

For the team behind foldable bicycle Nyfti, it came during traffic.

Carl Mamawal, the CEO and co-founder of Nyfti, recounted that Isidro Antonio “Ingko” Marfori III – one of his professors at De La Salle University, was having trouble with his commute to and from the university. By jeep, the journey took 30 minutes.

When Ingko switched to a bike, he was able to make the less than 3-kilometer distance in about 5 minutes.

The need for a foldable bike According to Mamawal, Ingko was still using a full-sized bike then, but he quickly realized that a folding bike would be much more convenient.

“While he was searching for a folding bike that fit his needs, he wasn’t satisfied because they were either too bulky when folded or just too expensive for him. “So he decided to design his own,” Mamawal said.

Mamawal was working together with Ingko at the time as a part-time project manager on a micro-hydro power plant project, bringing electricity to rural communities for the first time. He soon joined forces with Ingko in creating a better foldable bike.

Mamawal saw the value of a foldable bike immediately. “They’re easy to take anywhere – on the bus, train, up to the apartment, in your car,” he said.

Still, like Ingko, Mamawal did not simply want to recreate what was available abroad. “Our design is inspired by the current folding bikes out there, but are, of course, completely our own.” The Nyfti team began by making concept drawings on paper to brainstorm how the fold on the bicycle would look like. They then worked on, and fine-tuned the design using Solidworks, a specialized software for designing machines.

Once the Nyfti team was happy with the design, they built the first prototype themselves. “We cut the steel, bended it, brazed it together,” Mamawal said, recounting that it took 6 months to perfect the design on a computer and another month to make the actual prototype.

Making a prototype, of course, was only the beginning. The co-founding team has to eventually find a way to make the Nyfti bike en masse, and part and parcel of this is sourcing the right raw materials.

So Mamawal and the Nyfti team initially decided to make the bikes out of steel because the material was readily available in the Philippines.

“However, there is a special steel that we wanted to use to make the bike stronger and more corrosion resistant, but it’s not available here,” Mamawal said. “So we import them now from the United States.”

The Nyfti team also had to secure a Philippine patent application for their design.

Ideaspace Foundation, which incubated Nyfti, helped with this crucial task. “Without the patent search and patent application support, we wouldn’t feel so comfortable sharing our bike to the world and secure that no one will copy our design,” Mamawal said.

He added that while there may be companies which try to copy their design, they will at least have the documentation showing that they are its rightful creators.

Ideaspace Foundation also provided Nyfti with a wide range of other support, including business courses at the Asian Institute of Management, access to market research and mentors, and assistance with securing Securities and Exchange Commission, municipal, and Bureau of Internal Revenue registrations. Mamawal credits the incubator for helping him excel as a technopreneur.

“Nyfti Inc. was fast tracked because of all of Ideaspace’s support,” Mamawal said. “Without them we may probably not have the guts to start a local bicycle manufacturing company that plans to become a globally recognized entity.”

The traction the Nyfti team has gotten so far is indeed promising. They are in the process of fulfilling the orders for the first batch of bikes, which will be delivered in February. Nyfti is also drawing interest in places as far as Dubai, Japan, and the United Kingdom to export its bikes.

The Nyfti team is targeting professionals who already own a mountain bike or a road bike, as these are the people most likely to be interested in a folding bike.

To reach out to them, Nyfti launched its bike at the Phil Bike Expo in November and has been joining bazaars. Mamawal however noted, “We’ll change our strategy come January so we can target our customers effectively.”

These plans include a Kickstarter campaign slated for the second quarter of 2015. Mamawal thinks that it can be Nyfti’s gateway to the world.

“The Kickstarter campaign will be our ticket to international markets, since we know that it’s not only in the Philippines that a folding bike can be appreciated,” he said. “In fact, Nyfti has a bigger market outside the Philippines.”

Even as Nyfti goes global, Mamawal wants the bikes to be proudly made in the Philippines. While some parts and components may be imported from all over the world, the final product will be made and assembled here.

As a side note, Mamawal added that Filipinos are some of the most skilled welders in the world, and that’s why many of them are recruited to work abroad.

“We’re finding it difficult to look for local welders that will pass international standards,” he said. “Our goal for Nyfti is to create enough demand that we can bring back some of our world-class welders home.” – Rappler.com