Creating a culture of character in organizations MANILA, Philippines – A band of men and women is seeking to build a sustainable corporate culture in the country.

Salt & Light Ventures promotes values-based development through learning events and trainings in organizations coming from various industries. It has a roster of over 50 speakers who are seasoned practitioners and subject matter experts.

Its clients range from multinationals and large Filipino-owned firms to nonprofits. Among the prominent ones are AXA, Deutsche Bank, Petron, Smart, and Unilab.

One of its core beliefs: Character is the key to creating an organizational culture that lasts.

New members under its Asian Center for Trainers and Speakers joined a Q&A with the media on June 30, and freely shared a few ways on how character can be molded and even measured in the workplace –  and why it matters at all levels, from the C-suite to the rank-and-file.

“Start with your why,” according to Boris Joaquin, president and chief equipping officer at Salt & Light. This goes beyond plastering mission and vision statements on the office wall.

A purpose defines the impact an organization wants to make in its primary stakeholders: the clients or customers. When the purpose is clear to employees, they get a sense of direction. It will get them pumped up to do work that they know will affect lives for the better.

Procter & Gamble, for example, strives to “provide branded products and services superior of quality and value that improve the lives of the world’s consumers, now and for the generations to come.” 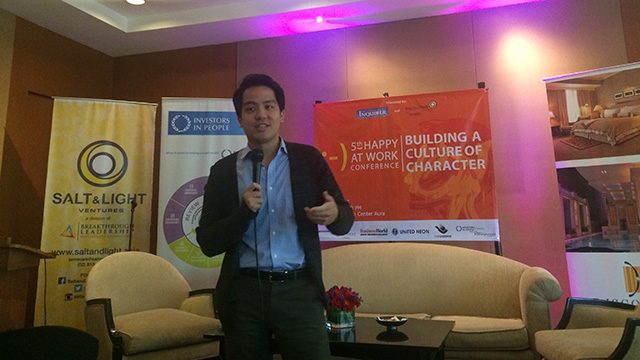 Focusing on character goes hand in hand with developing competence. David Bonifacio, director of strategy for the parent firm of Coffee Bean and Tea Leaf chain, put it this way:

Bonifacio added that competence is about getting better at something. To achieve such feat, one should find someone who is “really, really good at something… and listen to them”.

Character and competence eventually expand a person’s capabilities and credibility.

Generational diversity in an organization should not be seen as a form of division.

Oliver Pangan, a human resource and development consultant, differentiated the boomers, Gen Xers, and millennials – all of whom can sometimes be found in one company.

According to Pangan, boomers experienced working in the wake of war and destruction. Security is important for this generation.

Although not all, millennials enjoy the benefit of jobs that have already been created for them. They have a different set of values and qualities, such as the aversion to getting stuck in an office.

Gen Xers are the in-betweens, the ones born right before the advent of technology. An organization gets loyal employees in boomers and creatives in the millennials.

“Character is something that overwrites whether you’re a boomer, a Gen Xer, a millennial…,” Janet Webster said. “We have so much to learn from all the generations.”

Webster’s company measures the impact of the support it offers clients. It does so by asking an organization to link a process to a business priority or a key performance indicator (KPI). A good example would be linking service orientation training to customer management KPIs.

“Most organizations want to know they’re going to get a return,” she said. “Organizations should be able to say from the investment we put in the learning development: this is the result.”

UK national Webster is the chairman of Investors in People. She will be speaking more on the subject at Salt & Light’s 5th Happy at Work Conference: Building a Culture of Character on July 28. The event will be held at the SMX Convention Center, SM Aura, Taguig City.

Building a culture of character can be most effective when the higher-ups place a premium on employee happiness. Much has been said about human resource being the most valuable corporate asset. Mike Grogan, an Irish international leadership trainer who lives in the Philippines, has witnessed firsthand that without initiative from the top, this claim is dead.

Grogan shared that there were CEOs who refused to expose their employees to development events and trainings. They argued that training people would be a waste of time because their employees would leave anyway.

Disappointed with that kind of thinking in those leaders, he was reminded of the words of Virgin Group Founder Richard Branson. Quoting Branson, Grogan said” you got to train your people so good that they could lead your organization… You got to treat them so good they don’t want to leave.”

Recalling a line he once read from a comic strip, Pangan put it this way: “What if you don’t train your people and they stay?” – Rappler.com

Shadz Loresco is a freelance business writer for both online and print. Follow her on Twitter: @shadzloresco.