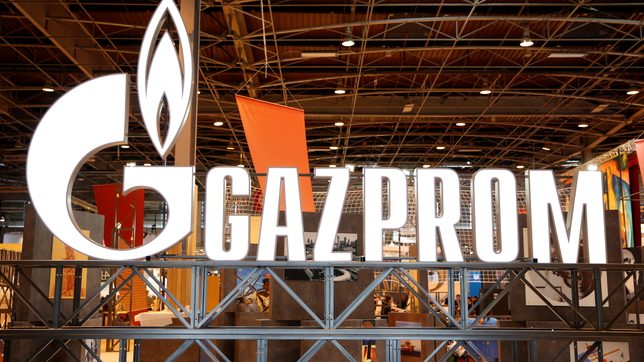 GAZPROM. The Gazprom logo is pictured at the 26th World Gas Conference in Paris, France, June 2, 2015.

Russia, whose gas production and exports to the European Union are already near record highs, said last week it needed to finish filling its own gas storage reserves before it could increase supplies to Europe’s spot market.

Gas markets in Asia and Europe have skyrocketed this year, with benchmark Dutch gas hub spot prices jumping by 365% since the year-start, fueled by low inventories and surging demand as economies recover from the COVID-19 crisis.

This has put Gazprom, Europe’s biggest gas supplier, front and center, with its exports rising by 13% and production up 17% since the start of the year.

The former Soviet gas ministry, which became a state company in the 1990s, runs a network of 23 gas storage sites in various locations; from abandoned gas fields to salt caves, securing between 20% and 40% of all domestic supply in the heating season.

If storage is full by November 1, then “unlike Europe, Russia will start the withdrawal season at a healthy storage level and should have some flexibility to ramp up gas sales to Europe,” said Marina Tsygankova, an analyst with Refinitiv.

“The question is if Gazprom wants to do it before Nord Stream 2 is certified,” she said, referring to the undersea gas pipeline from Russia to Germany opposed by a number of countries, including Ukraine and Poland, as it could deprive them of transit fees.

While finished and now being filled with the gas, the Nord Stream 2 is awaiting the go-ahead from Germany before it can start transporting supplies.

European inventories are about 14 bcm short of gas, including 8 bcm in Gazprom-linked facilities, partly due to Gazprom booking only a fraction of export capacity via Ukraine and Poland, said Dmitry Marinchenko, senior director at Fitch ratings agency.

“Until the end of the year, Russia should probably be able to provide at least an additional 5 to 10 bcm. November would be the right time to ramp up deliveries as in December, Russia’s own consumption will increase,” he said.

Russia has said it would prioritize its home market over exports and Gazprom’s supplies domestically have already risen by 17% so far this year, or by 26 bcm – equal to what Poland consumes annually.

But even with temperatures lower than usual across Russia last year, which Gazprom predicts may happen again this heating season, it used only 60.6 bcm from the storage at home, leaving another 12 bcm underground untouched.

Nonetheless, Smith of BCS brokerage cautioned that the Russian weather, and its influence on domestic consumption, could play a role in Gazprom’s export plans.

“Gazprom’s ability to export to Europe will be highly dependent upon Russian weather. September was cold, and October doesn’t appear to be warm,” he said.

And even if Russia increases supply, it’s unlikely to have an immediate impact on European spot prices, analysts at the Sweden-based bank SEB said, as prices at the European gas market are linked to the globally set liquefied natural gas (LNG) price.

“We see that more natural gas from Russia would only calm the nerves a bit – and that the TTF will still depend on the global LNG price both now, for the coming winter, and in the years to come,” SEB said. – Rappler.com