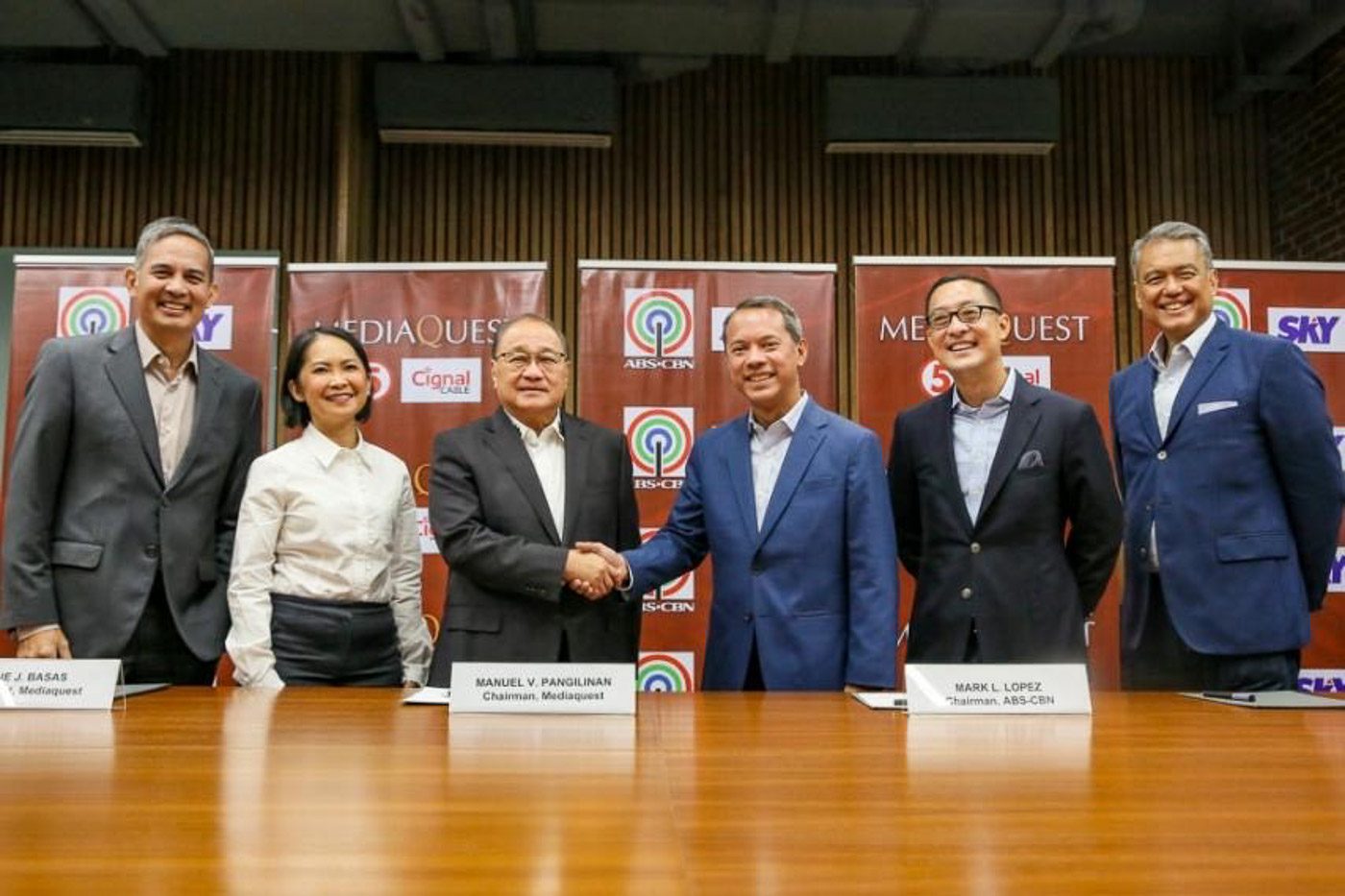 SEALED WITH A HANDSHAKE. Media giants ABS-CBN and TV5 officially sign a multibillion-peso investment deal on August 10, 2022, after over a year of negotiations, effectively consolidating both companies’ content and resources.

Photo courtesy of ABS-CBN and MediaQuest

MANILA, Philippines – From just hitting a pause, ABS-CBN and TV5 terminated what could have been the Philippines’ largest business deal in media and entertainment amid pressure from politicians and state regulators.

In separate stock exchange filings on Thursday, September 1, ABS-CBN said it terminated its P2.16-billion planned investment, which could have granted it 34.9% of TV5. A convertible note agreement would have allowed ABS-CBN to acquire not more than 49.9% of TV5.

The planned acquisition of 38.8% of the Lopezes’ Sky Cable by Manny Pangilinan’s Cignal for P2.86 billion was likewise terminated through a memorandum of agreement. Had the deal pushed through, it would have given Cignal the option to gain 61.1% of Sky Cable.

The deal between Cignal and Sky Cable is tied to the ABS-CBN and TV5 investment deal, as proceeds of the share sale would have been used to bankroll the Lopezes’ transactions.

Shares of ABS-CBN were put on trading halt following the fallout.

SAGIP Representative Rodante Marcoleta, one of the lawmakers who strongly opposed the franchise renewal of ABS-CBN, earlier sought a probe into the business deal, claiming that TV5 would be violating the terms of its broadcast franchise.

Meanwhile, the National Telecommunications Commission has issued a memorandum order which prohibits companies with franchises from engaging in business deals with parties “that have outstanding obligations to the national and local governments.”

Antitrust body Philippine Competition Commission earlier said that the transactions warranted a motu proprio review, even though the transactions’ amounts are below the thresholds through the Bayanihan to Recover as One Act or Bayanihan 2.

Former president Rodrigo Duterte repeatedly attacked ABS-CBN during his leadership, accusing the network of not paying the right taxes and unfair news coverage.

In 2017, Duterte accused ABS-CBN of “swindling” him, claiming it failed to show his political ads during the 2016 campaign season.

“Ang iyong franchise mag-end next year. If you expect ma-renew ‘yan, I’m sorry. I will see to it that you’re out,” Duterte said in 2019.

(Your franchise will end next year. If you expect it to be renewed, I’m sorry. I will see to it that you’re out.)  (READ: TIMELINE: Duterte against ABS-CBN’s franchise renewal)

Experts and advocates said that the shutdown has scarred the Philippines press freedom and weakened access to crucial information.

In 2020, ABS-CBN’s franchise renewal was rejected by lawmakers, forced the network to lay off thousands of employees amid the pandemic. (READ: Duterte’s ace against ABS-CBN, the Philippines’ biggest network)

Marcos and the Lopezes

This is not the first time that ABS-CBN went off free TV.

In 1972, soldiers padlocked ABS-CBN upon orders of the later dictator Ferdinand Marcos, the father of the incumbent president.

ABS-CBN would reopen only in 1986 after the EDSA People Power Revoltution ousted Marcos. – Rappler.com