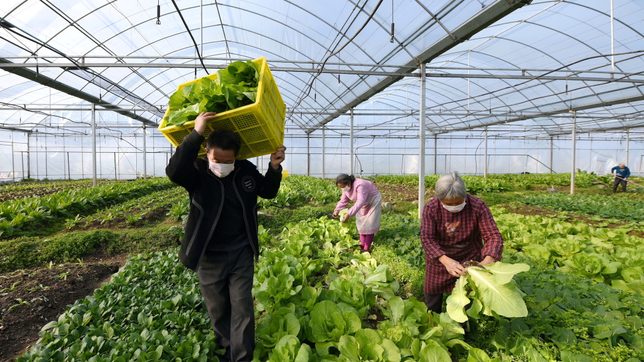 China’s vegetable production is basically normal and it has enough wheat to meet demand for one and a half years, agriculture officials said on Thursday, November 4, in a further effort to reassure the public there is no need to worry about shortages.

Shoppers rushed to stock up on staples this week after the commerce ministry advised the public to make sure they had enough daily necessities at home in case of emergencies.

Supermarkets in various cities around the country saw flour, rice, and other food items flying off the shelves.

Despite a recent increase in the price of spinach, lettuce, and other leafy vegetables due to extreme weather, the area and output of other major varieties had slightly increased, Tang Ke, director general of the Department of Market and Informatization under the Ministry of Agriculture and Rural Affairs, told reporters.

“The total supply is sufficient so consumers don’t need to worry,” he said.

China is expected to produce 750 million tons of vegetables this year, up 1% from last year, added Tang, providing a possible 1.5 kilogram (3.3 pounds) a day per person.

Still, Tang said further efforts were being made to guarantee sufficient vegetable production, with the government “guiding” big producers to expand output and empty greenhouses in northern areas to resume operations.

Both the rice and wheat crops increased this year and the output of both of China’s main staples exceeded consumption, said Liu Lihua, deputy director at the ministry’s Planting Management department.

China also has plenty of grain in state reserves, she added, with wheat stocks enough to cover consumption for one year and a half.

“Even when the domestic COVID-19 epidemic was at its worst last year, there was abundant supply of grain in supermarkets,” said Liu.

Planting of next year’s wheat crop, however, is significantly behind after heavy rains across the north in the autumn left many fields waterlogged.

As of Wednesday, November 3, China had sown 83% of its wheat crop, 3.4 percentage points slower than normal, said Liu, though the lag on previous years has narrowed.

The country, however, faces an oversupply of pork, with a breeding herd 6% larger than normal levels, said Chen Guanghua, deputy director of the ministry’s Animal Husbandry and Veterinary Bureau.

China had 45.6 million sows at the end of June, 2% more than the end of 2017, the last year before a devastating African swine fever epidemic. The excess had increased to 10% by August, according to government data, but Beijing has since called on farmers to cull inefficient sows.

Still, sow stocks won’t return to “reasonable” levels until next year, said Chen, who urged farmers not to “blindly gamble on the market outlook because of the current rise in pig prices.” – Rappler.com