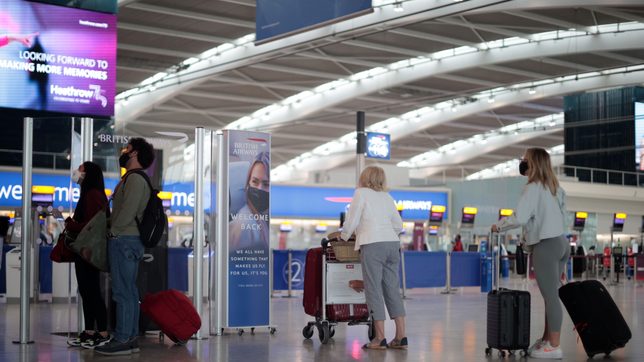 Airlines renewed their calls on Britain to restart international travel, pleading with the government to allow people vaccinated against COVID-19 to travel freely with the peak summer season just weeks away and as Europe begins to open up.

British Airways, EasyJet, and Ryanair said Britain’s strict quarantine rules which discourage travel will deepen the industry’s crisis as July and August, the months when it makes most of its profits, approach.

“The UK will get left behind because I do see Europe actually moving at a quicker pace to open up,” British Airways chief executive Sean Doyle said at an online conference.

“We should be acknowledging that vaccinated travelers have an inherently lower risk when they travel than those who don’t,” he said. “It’s crazy not to try and reap that dividend.”

EU countries have agreed to an easing of travel restrictions from July 1 that will allow fully vaccinated tourists to avoid tests or quarantines. The bloc also agreed on Wednesday, June 16, to allow non-essential travel from the United States.

All EU countries are currently on Britain’s amber list, which means if people visit they still have to self-isolate upon their return, even if they have been fully vaccinated.

Ryanair chief executive Michael O’Leary said in a statement that Britain should allow vaccinated UK and EU citizens to travel between the United Kingdom and the European Union without the need for quarantine and tests.

EasyJet said it was moving planes from the United Kingdom, usually its biggest market, to Europe as that is now where most of its bookings are coming from.

Planes that would usually fly from Britain to Palma in Mallorca, for example, are now flying from Berlin to the Spanish island instead, EasyJet said.

Britain on Monday, June 14, delayed the full reopening of its economy as cases of the Delta variant rise.

The aviation industry had been counting on Britons to be at the forefront of the resumption in travel given the country has one of the fastest vaccine rollouts in the world, with over half of adults receiving two doses of the jab.

Britain will provide an update on its list of destinations which do not require quarantine on June 24. – Rappler.com